WASHINGTON — Dressed to the nines in a white suit complete with Ray-Bans and slicked back hair, there was something criminal about the way Nationals’ slugger Bryce Harper stole the red carpet for the All-Star Game red carpet on Tuesday.

At least, that’s what detectives Sonny Crockett and Ricardo Tubbs from the ’80s hit TV series “Miami Vice” might have said of Harper’s new look.

For the All-Star Game itself, Harper, who had planned to wear pink cleats christened “Miami Bryce,” instead wore shoes in honor of Marlins’ former pitcher Jose Fernandez, according to The Washington Post. Harper’s cleats featured images of Fernandez, who died last September in a boating accident

For you Nino!💯 #JDF pic.twitter.com/jBWxNERwjs

Originally, Harper had planned to wear his “Miami Vice”-themed cleats for the game, according to The Bleacher Report. The shoes, courtesy of Harper’s sponsor Under Armour, went on sale Monday for $130.

Bryce Harper is going to rock these cleats in the #ASG 🔥 https://t.co/C6UfCrYYli pic.twitter.com/pE0jTmk6Np

If “Miami Bryce” is any indication, Harper may just take the fashion world by storm. 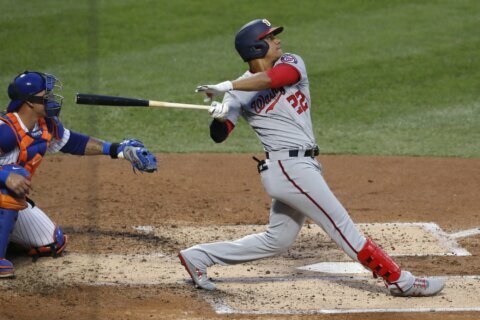