As Navy Yard redevelopment ramps up, establishments such as The Bullpen are getting pushed aside.
Listen now to WTOP News WTOP.com | Alexa | Google Home | WTOP App | 103.5 FM
(1/5) 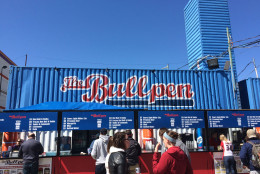 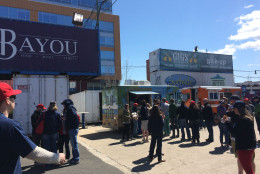 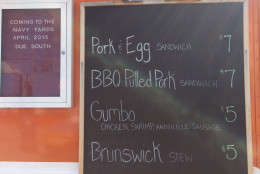 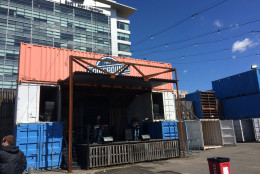 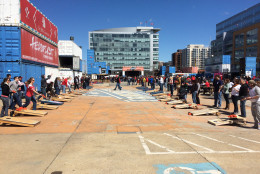 WASHINGTON — It has existed as long as Nationals Park has, but much like this year’s team on the field, the window may be closing on the most popular pregame and postgame stop for Nats fans. The Half Street Fairgrounds, known among many fans as simply The Bullpen, has only one or two more years before it closes up shop.

The collection of blue, orange and white shipping containers in the block between the Navy Yard Metro and Nationals Park may not look like much, but it serves as the unofficial destination of thousands of Nats fans each game. With live music, food trucks, dozens of cornhole boards and, of course, beer, it has become a part of the game-day tradition down in the Navy Yard.

But the land on which The Bullpen sits, formerly owned by real estate developer Akridge, was sold just before the start of the baseball season to JBG, which plans to develop two residential buildings and retail on the space. Fairgrounds owner Jason York says he has a one-year deal in place through the end of the 2015 season. Anything beyond that is up in the air at this point.

“We’re definitely good for this year,” said York on Saturday, before the exhibition game against the New York Yankees. “I think next year is not 100 percent sure, but we feel hopeful that we’ll get next year, and then that’s probably it.”

Considering the operation’s humble beginnings, it’s impressive how much of an institution it has become. Starting with just the small corner lot on the northwest corner of Half St. and N St., the space grew to include the entire block between N and M Streets.

For fans such as Katherine, from northern Virginia, the Bullpen is an institution — as much a part of the game-day experience as anything inside the ballpark. It’s the spot where she meets friends before or after games. It offers a cheaper alternative to some of the more expensive alternatives.

“I love it because it’s a place you can come and enjoy yourself without all the pomp and circumstance of D.C.,” she said.

For some, it’s more than just a pre- or postgame destination. Some will stay throughout the game — a growing number for games that sell out — and simply enjoy the company of their fellow fans outside the gates, across the street from the action.

“There’s always a couple hundred people hanging around (during the game),” said York. “If the games sell out, we’ll have a couple thousand people staying during the game.”

This season, York is accommodating his prices for those who would prefer to stay, offering a game-day happy hour from the top of the third inning through the bottom of the seventh. A television shows the action as well, but for major games, York brings in a projector screen, as he did for the playoffs last year.

“We probably should have bought one four or five years ago,” he said of the screen. “Now that we know we’re going away in a couple of years, we’ll probably just bring it in for bigger events.”

The Fairgrounds are owned by Georgetown Events, the same group that owns Bayou, Surfside, Jettie’s and a few other establishments around the District. They also have a Due South food truck serving Southern food this year, and will open a brick-and-mortar location in the Navy Yard neighborhood sometime this summer. Thankfully, most employees at The Fairgrounds work for Georgetown Events in some other capacity, so only a couple of full-time jobs will be affected by the eventual shutdown.

Plus, there’s always the possibility of potentially becoming a part of the permanent space on the block whenever construction is finished.

“Once they build a building here on our actual spot, we’d love to have a spot in this place as well,” said York. “People know our name. People have been here for years and years. Hopefully we’ll have the chance to keep it going.”