Less than 15 hours later, they had a basketball game scheduled against the Mystics at the Entertainment and Sports Arena.
Listen now to WTOP News WTOP.com | Alexa | Google Home | WTOP App | 103.5 FM

WASHINGTON – A canceled flight, mechanical issues on a second plane and nearly 12 hours of gate-hopping, layovers and eventual travel got the Minnesota Lynx into Washington, D.C. in the wee hours of Sunday morning. Less than 15 hours later, they had a basketball game scheduled against the Mystics at the Entertainment and Sports Arena.

But despite the near hour-by-hour documentation by Natalie Achonwa on Twitter and subsequent outrage of WNBA Twitter, don’t ask Mystics head coach Mike Thibault for any sympathy.

“I’m tired of hearing about it,” Thibault said pregame. “I’m tired of reading about it on Twitter. I’m tired about it. It happens to every team, and I get it. Every team would like to come in feeling fully refreshed but they got here last night. They didn’t play yesterday. They didn’t play yesterday and I know it’s a long day but everybody goes through that. We took a train six hours and then got on a bus for another hour and a half earlier in the year to play in Connecticut.”

He even went as far as making a mock crying face before speaking.

Thibault would apologize for the action after the game on Twitter.

Transportation issues have continuously reared their ugly head in the WNBA ever since the league’s inaugural season. It’s rare to go a couple of months without one team having a flight canceled or a several-hour layover.

But as the league has progressed forward over the last few years, many are calling for the current standards to change. Making the leap from flying commercial to potentially private — like the rest of the top American sports leagues — is a constant discussion point. It reached a breaking point last season when the New York Liberty’s owners, Joe and Clara Tsai, provided their team chartered flights in the latter half of the year. It led to a reported record fine of $500,000 as the league deemed it a “competitive advantage.”

This situation, in particular, was exacerbated by how Lynx head coach Cheryl Reeve thought Minnesota’s plights were being addressed by the league office. There was no communication to the team on how the WNBA could help alleviate the situation. They played a true back-to-back, playing at home in Minneapolis on Thursday, at the Indiana Fever on Friday, then turning around to play in Washington two days later.

Related: Getting Rui Machida acclimated to the WNBA

“I’ve been in the league a long time, as a leader of a team for more than a decade and if you do this long enough, you’re gonna be in these situations,” Reeve told reporters pregame.

“I think in our situation, yeah, it was challenging and disappointing that we were in that situation. Probably greater disappointment was a lack of support that we felt in terms of unresponsive messages to the league about considering [chartering a flight and pushing the game back]. And so, from our standpoint, there was no communication with the leadership of the Minnesota Lynx. And so that, to me, is an epic fail.”

With the way things were progressing on how it was getting more and more dire for the Lynx, the WNBA reached out to the Mystics. Thibault said the team simply was not in a situation to be able to reschedule or even push the game back. It was an announced sellout, which would end up being a 70-57 Washington win.

“I mean, we have close to a sellout today and it’s not like they were arriving this morning,” Thibault said. “I know it was a long travel day, we’ve all had them. So, we weren’t in a position to really accommodate them, unless there was a much more mitigating circumstance in areas right now.”

Of course, chartered flights would cause many of these transportation issues to be moot. Thibault pointed out that this has been a problem for several years in the league and recalled multiple instances where his teams were in tough spots when it came to travel problems. He’s been in the league for 20 years and has had his fair share of hiccups while relying on commercial flights.

This time it was the Lynx. Years ago, the Las Vegas Aces decided not play against the Mystics due to repeated travel delays and that game was canceled. Tomorrow, it could be Washington or any other team in the league.

“That’s just life. And I’d like to feel sorry for them but I’m sorry I don’t,” Thibault said. 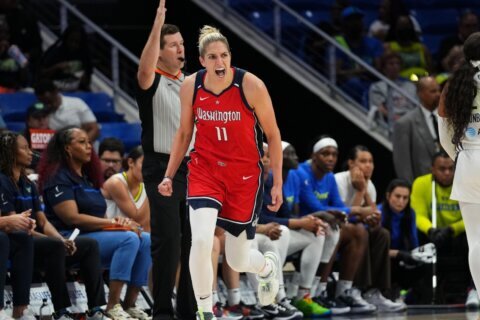