NEW YORK (AP) — Kayla McBride scored 24 points in her season debut for Minnesota while Sylvia Fowles and Moriah Jefferson each added 20 points to help the Lynx win their first game of the season with a 87-84 victory over the Los Angeles Sparks on Tuesday night.

McBride, who missed the first four games of the season finishing up playing in Turkey, made 4 of 7 from 3-point range, Jefferson finished with seven rebounds, six assists and four steals and Fowles added 12 rebounds and two blocks. Jessica Shepard finished with 10 points and nine rebounds.

Minnesota (1-4) avoided its first season-opening five-game losing streak since 2007. The Lynx began the 2021 season with four consecutive losses before finishing the season with 22 wins, third most in the WNBA.

Nneka Ogwumike missed a driving layup for the Sparks but grabbed her own offensive rebound and kicked it out to Lexie Brown for a 3-pointer to make it 84-all with 53.3 seconds to play. Shepard’s putback off a missed layup by Jefferson put the Lynx back in front 19 seconds later but Liz Cambage was fouled as she hit a shot in the lane with 15.1 remaining. She missed the free throw.

McBride was fouled as she made a reverse layup and converted the three-point play to cap the scoring with 2.1 seconds left.

NEW YORK (AP) — DeWanna Bonner made her season debut for Connecticut and scored 12 of her 16 points in the decisive first half and the Sun beat the Liberty.

Natasha Heideman had a season-high 15 points, Brionna Jones scored 14, Jonquel Jones 13 and Alyssa Thomas had 12 points and four steals. Courtney Williams, who also sat out the first two games (suspension), had four points on 1-of-4 shooting with 18 minutes.

The Sun (2-1) missed their first six shots and committed two turnovers as New York scored 10 of the game’s first 12 points before Michaela Onyenwere hit a 3-pointer to give the Liberty a 15-11 lead with 2:48 left in the first quarter. Brionna Jones answered with a layup and Heideman followed with a 3 to spark an 18-0 run over the next nearly-4 minutes to take the lead for good.

ARLINGTON, Texas (AP) — Shakira Austin, the No. 3 overall pick in last month’s draft, scored 12 of her career-high 20 points in the second half as the Mystics pulled away from the Wings.

The 6-foot-5 Austin made 9 of 11 from the field, grabbed eight rebounds and blocked two shots. Elena Delle Donne added 14 points for Washington (4-1),

The Wings (2-2) jumped to a 19-6 lead but then went scoreless for 4-plus minutes as Washington scored 13 consecutive points to tie it early in the second quarter and Austin made two free throws to give the Mystics their first lead with 3:34 left in the second quarter and followed with a layup 37 seconds later to make it 34-31. Marina Mabrey hit a 3-pointer for Dallas but Cloud answered with a 3 of her own to make it 37-34 at halftime and Washington led the rest of the way.

Erica Wheeler had a season-high 16 points and rookie Kristy Wallace added a career-best 15 for Atlanta. Wallace was a second-round pick out of Baylor in 2018 and made her WNBA debut in the season opener after playing professionally in her native Australia the last four seasons.

Howard hit 3-pointers to start and end an 11-2 opening run and the Dream never trailed. Wheeler made a basket to give Atlanta a 17-point lead late in the second quarter and Indiana trailed by double figures throughout the second half.

Atlanta (4-1) is off to its best start since 2017 when the Dream won four of their first five games before winning just eight of the last 29 — including a nine game losing streak.

Phoenix (2-2) led by as many as 12 points in the first half and Megan Gustafson hit a 3-pointer to give the Mercury a 36-26 lead with 8:34 left in the second quarter but Las Vegas scored 21 of the next 28 points to take a four-point lead early in the second half and the Aces never again trailed.

The Mercury’s Skylar Diggins-Smith and Diana Taurasi twice had to be separated after a heated exchange during a timeout late in the first half. The duo — both WNBA All-Stars last season — combined to score 18 points on 4-of-15 shooting. 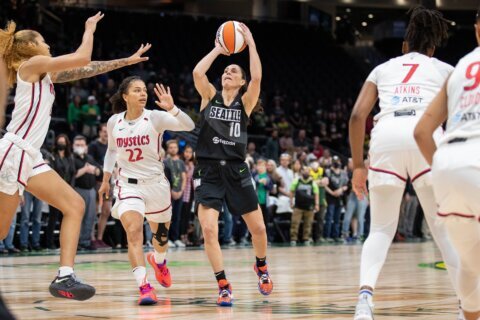 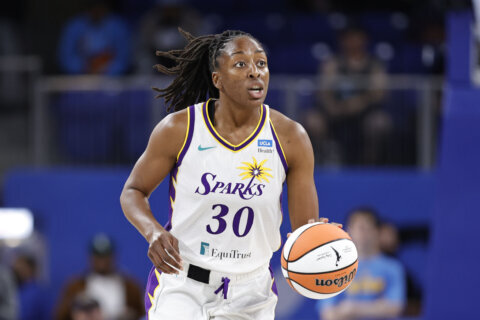 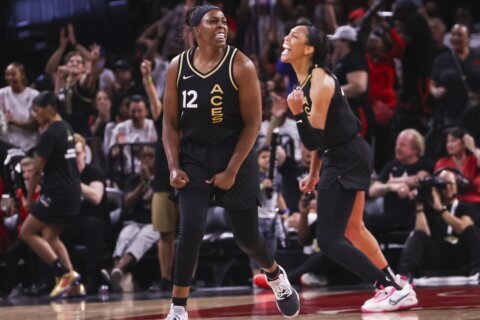