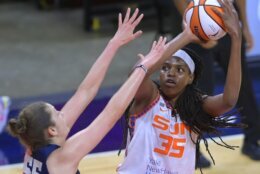 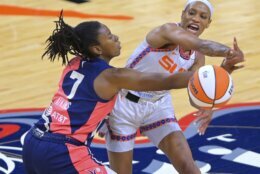 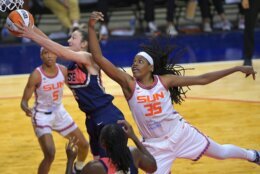 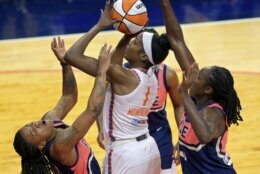 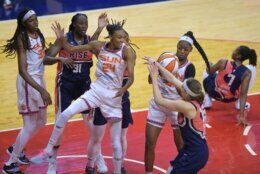 WASHINGTON (AP) — Jonquel Jones scored 23 points and grabbed 16 rebounds in her return from the EuroBasket tournament, and the Connecticut Sun beat the short-handed Washington Mystics 90-71 on Tuesday night.

Jones, who recently got back from Spain, had to pass multiple COVID-19 tests before playing the Mystics. She got going early, collecting a double double in the first half with 19 points and 11 rebounds.

Washington only had six healthy players available. Natasha Cloud (ankle) was a late scratch from the lineup, and Myisha Hines-Allen (knee) and Elena Delle Donne (back) are still out.

Tina Charles scored 26 points, reaching 25-plus points for a fifth straight game, for Washington (7-9). The Mystics were outrebounded 52-13.

Charles picked up two fouls in the opening four minutes of the game but finished the first half with 17 points on 6-of-15 shooting. The Mystics were outscored 27-14 in the second quarter, and trailed 49-33 at the break.