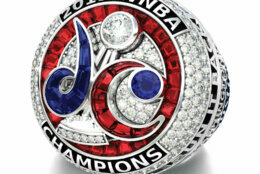 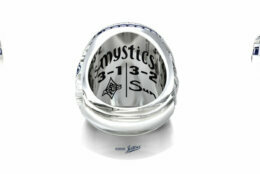 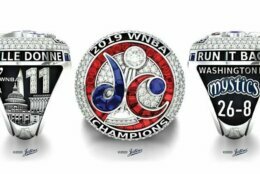 Created by jeweler Jostens, the ring is adorned with custom-cut rubies and sapphires displaying the Mystics D.C. logo.

It is set atop a depiction of the WNBA Championship Trophy, which features six diamonds in its base, signifying the number of games the Mystics won during their 2019 playoff run.

One larger diamond at the top pays homage to their first-ever championship victory.

Each player’s name covers the top left side of their ring, joined together with their jersey number and D.C. landmarks drawn in.

The right side spells out “RUN IT BACK,” the team’s slogan during their playoff run, along with the team’s logo and 26-8 regular-season record.

The ring’s interior features the Mystics logo set above the playoff series results, including the opposing teams’ logos.

The rings feature an average of 120 diamonds, and six custom-cut and 29 taper-cut rubies. The ring weighs in at a total of nine carats.

Players and coaches reached their rings as a team in a private ceremony.

The Mystics won the championship by defeating the Connecticut Sun 89-78 in Game Five of the WNBA Finals last Oct. 10.

Jostens and the Mystics are also producing an official jewelry collection to commemorate the 2019 championship. Fans can purchase a replica championship ring and other personalized jewelry for a limited time online through Jostens.

“It is my tremendous privilege to celebrate the awesome athletic achievement of our Champion Mystics with the presentation of this meticulously-crafted ring,” Sheila C. Johnson, Washington Mystics managing partner, said in a statement. “Our season was historic, extending beyond the records they broke along their journey.”

The Mystics will attempt to defend their WNBA championship in a shortened 22-game season in Florida, which will start in late July without fans in attendance.

Washington will be without Natasha Cloud and LaToya Sanders, who are opting out of participating in the 2020 season.