5 Washington players who could be auditioning for 2022 roster spot vs. Giants

Slim playoff hopes for the Washington Football Team were officially eliminated this past weekend following a 20-16 loss to the Philadelphia Eagles, making this outcome of this upcoming Sunday’s clash with the lowly New York Giants practically meaningless outside of draft position.

However, while the result of Sunday’s game might not mean much in the grand scheme of things for Washington, there are several players that could view Week 18 as an unofficial audition for next season.

Currently, Washington has over 30 players on its roster who have appeared in a game this season that are free agents at year’s end. Many of them likely won’t be back, but the odds are at least a handful will remain with the franchise next season.

Here are five Washington players who could be auditioning for a 2022 roster spot this Sunday against the Giants.

For this exercise, there’s no more obvious choice than Kyle Allen, who is set to be a restricted free agent following the 2021 season.

However, while Ron Rivera said a couple of weeks ago that the 26-year-old would “probably” play over the final two weeks, the head coach named Taylor Heinicke as the starter for Sunday’s regular-season finale. So, even if Allen does play in Week 18, Rivera and the coaching staff won’t have a full game of work to evaluate him on.

Allen’s situation is different than many of the remaining players on this list, though. Rivera and his staff, particularly offensive coordinator Scott Turner, know what Allen can do. Allen played under Rivera and Turner in Carolina. And, when the two coaches arrived in Washington in 2020, the club sent a fifth-round pick in order to bring Allen to the nation’s capital.

Allen has played sparingly this year, as he began the season as the club’s third-stringer behind Ryan Fitzpatrick and Heinicke. Quarterback is an obvious position of need entering the offseason for Washington, as it’s likely the team’s Week 1 starter in 2022 isn’t currently on the roster. Heinicke is under contract for next season, but it wouldn’t be surprising if Washington tried to retain Allen next season in a reserve role, either.

The underdog story of Cam Sims continues to unfold. An undrafted player out of Alabama in 2018, Sims spent the first two years of his career mainly on Washington’s practice squad before getting his first real opportunity in 2020. Sims took full advantage of it last season, as he finished as Washington’s second-leading wideout behind Terry McLaurin.

Sims has not played nearly as much in 2021 as he did in 2020, largely in part to the additions Washington made to its receiver room this offseason. However, due to injuries and an overall lack of production from the rest of Washington’s receivers, Sims has had a prominent role in the offense over the past month. This past week against Philadelphia, Sims hauled in a season-high four receptions.

Wide receiver is a position Washington must, once again, address in the offseason — whether it’s in free agency or the draft. Regardless, though, Sims has made a solid case for himself to be re-signed as a depth piece this spring. Another good game this weekend could help his cause even more.

Signed as a free agent in May following his surprise release from Chicago, Charles Leno has been a staple for Washington’s offensive line this season. Leno has started all 16 games for the club in 2021 — the only offensive lineman on the team to do so — and has been stout all season.

According to Pro Football Focus, Leno has graded out as Washington’s best offensive lineman this season. Yes, that includes Pro Bowl guard and 2020 All-Pro Brandon Scherff, too. Leno has additionally registered a PFF 86.5 pass-blocking grade, the third-best of any tackle in the NFL.

Leno signed a one-year deal with Washington, so he’s an unrestricted free agent this offseason. Sunday’s game is not really an audition for Leno — he has a whole season of film for Washington to evaluate — but rather one last shot to really prove to the coaching staff that he deserves an extension this season.

Based on his play this season, Washington would be wise to try and retain Leno. But, with Brandon Scherff also set to be a free agent this offseason, the front office has plenty of decisions to make regarding who stays and who goes along the offensive front.

Sticking with the offensive line, second-year veteran Keith Ismael is another intriguing player for Washington to evaluate this season. A fifth-round pick in 2020, Ismael played just four offensive snaps as a rookie and was released during final roster cuts this past August. Yet, the next day, Ismael was brought back on the practice squad.

Ismael was promoted to Washington’s active roster in November and was thrust into action following season-ending injuries to Wes Schweitzer and Chase Roullier. Ismael, who began the year as technically the team’s fourth-string center, has started four of the past five games.

Ismael has been solid for Washington — he’s graded out as an above-average center, per PFF, ahead of the likes of Ryan Kelly, Tyler Biadasz and Eric McCoy. Should he turn in one more good game this Sunday against New York, Washington should seriously consider bringing him back in 2022 as a depth piece behind Roullier, who should return from a broken fibula by the beginning of next season.

A kicker? Yes, a kicker!

Washington has employed four different kickers in 2021, but Joey Slye has by far been the best of the bunch. Picked up midseason, Slye has made all nine of his field-goal attempts this season, including a 55-yarder last week against Philadelphia. He’s also knocked eight of his nine extra-point attempts through the uprights.

Slye is a free agent following the season, but another solid performance this upcoming Sunday should lock up his roster spot for 2022 and beyond. As Rivera witnessed firsthand this season, reliable NFL kickers are hard to come by. Slye, who kicked under Rivera in Carolina as well, has been just that for Washington and deserves an extension. 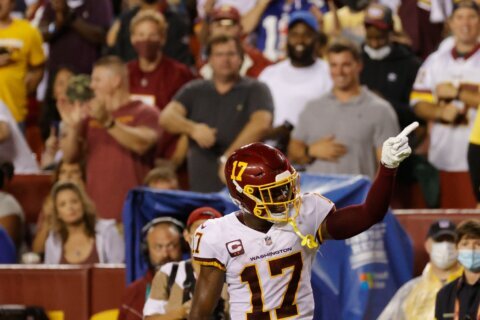 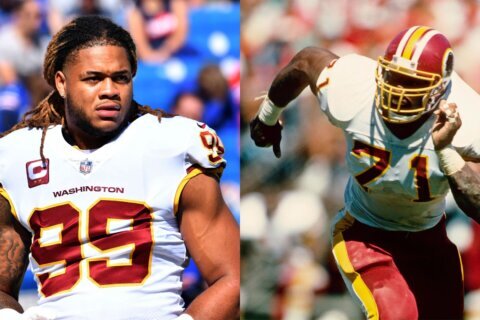