The Washington Football Team selected Antonio Gibson in the third round of last year's NFL Draft. The former Memphis running back had a good rookie year, and now PFF's Zach Tantillo expects the 23-year-old to be one of the breakout sophomores heading into the 2021 season.
Listen now to WTOP News WTOP.com | Alexa | Google Home | WTOP App | 103.5 FM

The Washington Football Team selected Antonio Gibson in the third round of last year’s NFL Draft. The former Memphis running back had a good rookie year, and now PFF’s Zach Tantillo expects the 23-year-old to be one of the breakout sophomores heading into the 2021 season.

In his first season, Gibson had 795 rushing yards on 170 carries. The Washington running back gained over 1,000 yards total, while scoring 11 touchdowns.

According to PFF, Gibson finished the 2020 season with 37 missed tackles forced and had four rushing touchdowns of over ten or more yards. Despite being a rookie, Gibson put together a season that many would expect from a veteran running back with plenty of NFL experience.

Furthermore, PFF hopes that in the running back’s sophomore year, Washington feeds him the ball more as he’s only scratching the surface of his potential.

“If Antonio Gibson gets a full workload — and not fewer carries than players like Frank Gore — then expect him to emerge as a top-10 running back in the NFL next season,” Tantillo wrote. 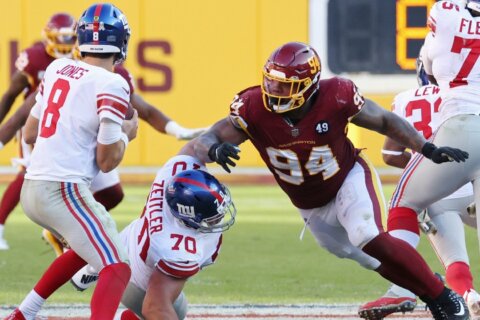