Ahead of the matchup before the Washington Football Team and the Baltimore Ravens, a look at how fortune has favored these two teams.
Listen now to WTOP News WTOP.com | Alexa | Google Home | WTOP App | 103.5 FM

Google Maps will tell you that FedEx Field in Prince George’s County, Maryland, lies 32.6 miles away from M&T Bank Stadium in Baltimore. But while on a good day it might take you 40 minutes to go from one stadium to the other, the gap between the NFL’s mid-Atlantic neighbors is much wider.

The only reason its not more obvious is that these two teams only play once every four years (with the move to a 17th regular season game, I think that might change), and their respective blood boils a lot more for their division foes.

Start with on-field success: the burgundy and gold have made the playoffs four times this century, while the Ravens have reached the AFC Championship Game four times.

Just one last-place finish (2007) and six division titles. The Washington Football team has a pair of NFC East titles in that span, while finishing last in the division nine times.

Since 2000, the purple and black have had the better record 15 times to just four better seasons for Washington (they both finished 7-9 in 2002). For an entire generation of fans too young to remember the glory days of Joe Gibbs 1.0, the WFT has been more WTF.

Each team starts a young quarterback whom they’ve chosen in the first round of the NFL Draft, but while reigning league MVP Lamar Jackson looks to be a Ravens fixture for the bulk of this decade, there are plenty of question marks surrounding Dwayne Haskins. And it’s not just because of his shaky start (his 78.4 passer rating ranks 29th in the NFL).

There’s been a quarterback carousel in Ashburn, Virginia, since Brad Johnson was shown the door in 2000: The team has had 11 other leading passers since 2000, and that includes Haskins becoming the fourth different week one starting QB last month.

The Ravens? Just four primary starters over the last 17 years, after going through three in three seasons to start the century (let the record show that Tony Banks went from leading the Ravens in passing yards in 2000 before doing the same in Washington the next year).

The stability doesn’t start at the quarterback position: There have been just three head coaches since the Ravens came to Baltimore, with two this century.

Washington has made seven coaching hires in that time (for the record, I don’t count the interim tenures of Terry Robiskie and Bill Callahan in the total).

It’s also easier to keep your job when you have a talented roster: Since coming to the Charm City, the Ravens have seen 21 of their players post 40 First Team All Pro seasons.

In that span, the WFT has had just one First Team All Pro: punter Matt Turk in 1996. WTF, indeed.

While both stadiums will be similarly empty in 2020, in other seasons there’s usually a contrast between the two teams’ home fields.

Although the Ravens on average outdrew Washington by just 5,139 fans in 2019, they ranked 12th in the league (according to ESPN), with an average stadium capacity of 99.5, while the Washington Football team finished 30th at 79.9.

Until the Washington Football Team gets a new home, they’ll be enviously looking at an M&T that’s a lot easier to get to and right in the middle of a thriving city.

It wasn’t always like this. Before the Colts left Baltimore, they were Exhibit A when it came to mismanaged franchises and spoiled goodwill under then-owner Robert Irsay.

After a trade of teams (yes, this actually happened in 1972 after Irsay bought the Rams from the estate of the late Dan Reeves) gave Irsay a Colts franchise that was less than two years removed from a Super Bowl title, he proceeded to ruin it by swapping out coaches (seven over a 12-year span), while the team in Washington that had floundered under George Preston Marshall’s tenure ascended under Edward Bennett Williams and then Jack Kent Cooke.

Current Ravens owner Steve Bischiotti is 60 years old, while Dan Snyder is 55. Even with a new front office regime and coaching staff in place in Ashburn, it’s going to be a while before the two teams’ fortunes can be as close as their respective cities are. 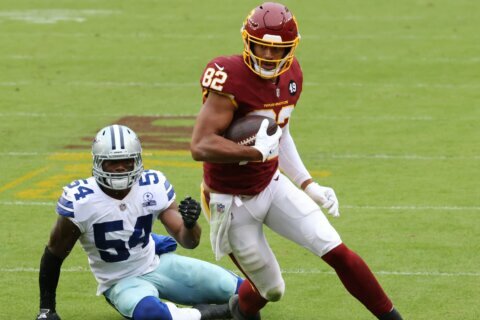