The Washington Redskins have traded seven-time Pro Bowl offensive tackle Trent Williams to the San Francisco 49ers in exchange for a fifth-round pick in this year’s draft and a third in the 2021 draft, according to multiple sources.
Listen now to WTOP News WTOP.com | Alexa | Google Home | WTOP App | 103.5 FM

The Washington Redskins have traded seven-time Pro Bowl offensive tackle Trent Williams to the San Francisco 49ers in exchange for a fifth-round pick in this year’s draft and a third in the 2021 draft, according to multiple sources.

The move, which is pending a physical, ends a bitter saga that saw Williams sit out all of the 2019 season because of a dispute with management. His agent, Vincent Taylor, said in a statement that it was time for Williams to leave Washington.

“Trent Williams is ready to get back to competing in the NFL and is glad to be part of a great organization like the San Francisco 49ers,” Taylor said.

The 49ers had a big need at left tackle because six-time Pro Bowler Joe Staley informed them he planned to retire. He announced it later Saturday, saying a deteriorating neck injury led to his decision to retire after 13 seasons.

The trade also reunites Williams with 49ers head coach and former Redskins offensive coordinator Kyle Shanahan, who was in Washington when Williams was drafted fourth overall in 2010.

Williams made the Pro Bowl every season from 2012-18 and is considered one of the best left tackles in the league when healthy. He has one year remaining on his contract, which will pay him $12.5 million this season.

The Redskins seemed to address the offensive tackle position immediately by selecting OT Saahdiq Charles out of LSU with the second pick in the fourth round.

“Growing up as an offensive lineman, I watched Trent’s film many a time, and I have a lot of respect for his game,” Charles said. “Just to see that they traded him and picked me, it just shows what they might have in mind for me. I’m going to come in there (with) hard work and go do my thing.”

WTOP’s Rob Woodfork and The Associated Press contributed to this report. 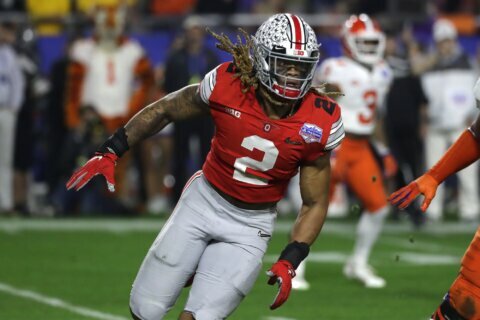