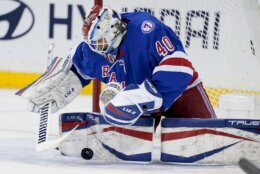 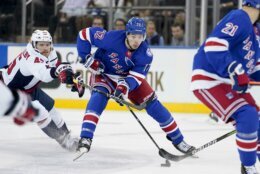 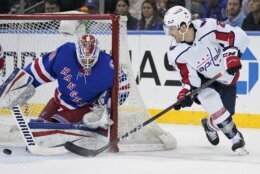 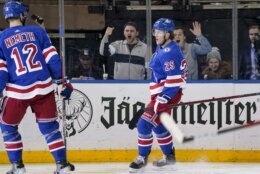 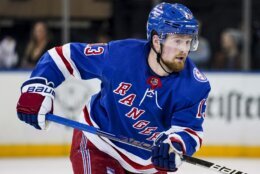 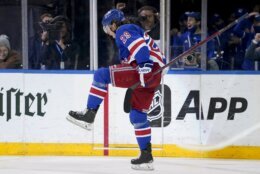 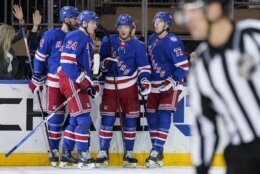 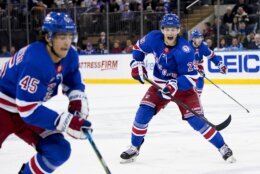 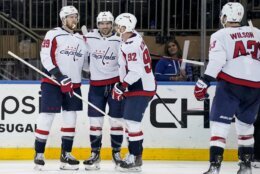 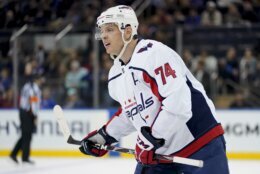 NEW YORK (AP) — Dryden Hunt scored the go-ahead goal in the third period, Alexandar Georgiev made 34 saves and the New York Rangers downed the Washington Capitals 3-2 in the regular-season finale on Friday night.

The Capitals’ loss means the Pittsburgh Penguins take the No. 3 seed in the Metropolitan Division and will play the Rangers (52-24-6), who are in the postseason for the first time since 2017. Washington (44-26-12) will go into the playoffs as the East’s second wild card, and will match up with the Florida Panthers.

“It’s been a grind, a couple of long years,” said Zibanejad, who along with Chris Kreider is left from the Rangers’ 2017 postseason team. “It’s definitely worth the wait to be back in the playoffs. To be part of this group, to be part of the solution when everything happened. I’m just really excited to get going.”

Hunt’s sixth goal of the campaign came on a dazzling move in front to fool Capitals goaltender Ilya Samsonov at 6:42, with assists for Kaapo Kakko and Adam Fox.

“I kind of ran out of room, I will take it,” Hunt said about his game-winning goal. ”It’s been fun to be part of a team that expects to win every night.”

The Rangers’ 52 wins is the second-most in team history, tying the 1993-94 squad that went on to win the Stanley Cup. The 2014-15 Rangers won 53 games before losing in the Eastern Conference finals to Tampa Bay.

After a scoreless first period, Filip Chytil opened the scoring for the Rangers at 3:26 of the second, sliding the puck past Samonov for his eighth goal of the season. Kakko and Schneider assisted.

But Washington took a 2-1 lead after defensemen Justin Schultz and John Carlson scored.

Rangers forward Alexis Lafreniere tied it with his 19th goal of the season at 15:44 of the second with assists to Schneider and Ryan Strome before Hunt’s third-period heroics.

Both teams entered the contest on three-game losing streaks.

Samsonov had 30 saves in defeat as Washington finished with a league-best road record of 25-10-6.

“Tonight I thought we played a good game and it didn’t go our way. A couple of tough bounces out there,” Capitals coach Peter Laviolette said. ”It would have been nice to end with some wins but the season is over. It’s time to get ready for Florida.”

Washington’s injured leading scorer Alex Ovechkin missed his third straight game to finish the regular season. The 36-year-old scored 50 goals for the ninth time and had 90 points overall in his 17th NHL season.

Washington reached the 100-point mark for the sixth time in their last eight seasons — and is the only team with least 100 points six times over that span … The Capitals also secured their eighth-straight playoff berth, the second-longest active streak in the league behind Pittsburgh’s 16 straight.

Samsonov (23) and Vitek Vanecek (20) each reached the 20-win mark this season, the second time in franchise history two goaltenders reached that mark in the same year. The previous season was 1983-84 when Al Jensen and Pat Riggin accomplished the feat. Two other teams have also done so this season: Boston (Jeremy Swayman and Linus Ullmark) and Los Angeles (Jonathan Quick and Calvin Petersen. )