The well-traveled Stanley Cup made its way to Capitol Hill, where fans decked out in team apparel lined the halls of the Rayburn Building to get their turn with the championship prize won by the Washington Capitals this summer.
Listen now to WTOP News WTOP.com | Alexa | Google Home | WTOP App | 103.5 FM
(1/3) 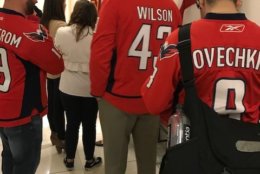 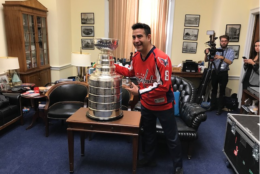 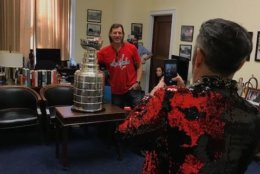 WASHINGTON — The Stanley Cup, which has traveled as far away as Siberia, Sweden and Saskatchewan since the Washington Capitals won the NHL championship, made its way to Capitol Hill on Wednesday.

The Rayburn Building was “Rocking The Red,” as Caps fans decked out in team sweaters and T-shirts lined up in the halls of Congress.

They waited patiently in line for a chance to take a close up with the Cup in the office of D.C. Del. Eleanor Holmes Norton, who invited people to share a moment with Lord Stanley.

“Many Cap fans are right here in the Congress,” Norton said with a big smile on her face, noting that she also posed for pictures with the Cup. “Finally, we hit the jackpot and we are making the very most of it.”

Among those who waited in line for a moment with the Stanley Cup was Dave Osborne of Bethesda, who said he grew up as a “die hard” Caps fan in suburban Maryland.

“It’s pretty awesome,” Osborne said, noting he went to several playoff games, including a Stanley Cup Final game against the Las Vegas Golden Knights, who the Capitals defeated in five games to win the series. “But to actually touch the cup, to see the cup, to touch the Holy Grail — it’s a different level.”

Alfredo Flores, wearing an Alexander Ovechkin jersey, said he worked as an intern in 1998 at what is now Capitol One Arena and saw the Capitals in the Stanley Cup Final that year get swept in four games by the Detroit Red Wings.

“It’s such a much bigger thrill this time around, 20 years later,” said Flores, who grew up in D.C. “We had the Redskins in the 90’s doing really well and then D.C. United as of late. But to have one of the major championships is thrilling.”

Several others said they appreciated getting a chance to see the Cup, including some who are just hockey fans in general.

“We wanted to come up and pay homage to our great Red Wings, who have won the Stanley Cup several times,” said Miles Miller, who’s from outside of Detroit.

A steady line of Caps fans, as well as people just interested in seeing the Cup in person, made their way into Norton’s office. The orderly procession was a far cry from some of the wilder celebrations with the Stanley Cup that took place after the Caps won it earlier this year — especially Ovechkin’s keg stand with the Cup in Georgetown that went viral.

Ovechkin later took the Cup to his native Russia, and several of his teammates took the Cup with them to their home countries over the summer. 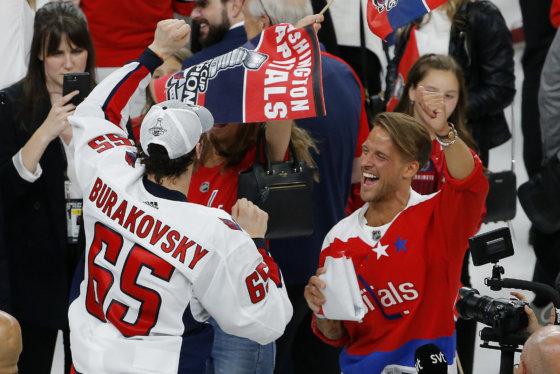