Holidays: 'Enchant' shines with millions of lights in Nats Park | Where to see holiday lights | Send in photos of decorations | How to give greener this season
Home » Virginia News » Va. students walk out… 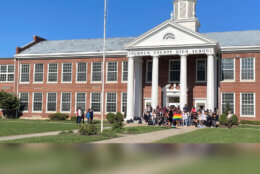 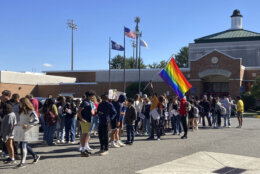 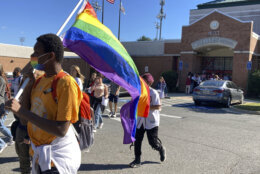 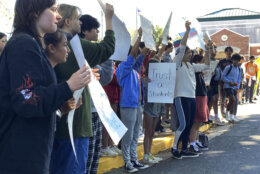 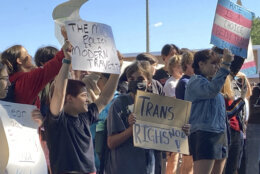 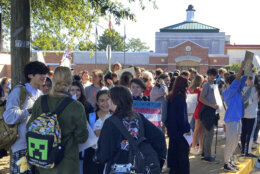 On Tuesday, some students around Northern Virginia staged walkouts, as a protest against Gov. Glenn Youngkin’s policy changes that impact LGBTQ students.

Dozens of schools participated in the walkout, including campuses in Fairfax, Prince William, Loudoun, Arlington and Stafford counties.

A student-led group based in Virginia — the Pride Liberation Project — organized the walkouts.

The 2022 Model Policies define the word “sex” as biological sex, and the phrase “transgender students” means “a public school student whose parent has requested in writing, due to their child’s persistent and sincere belief that his or her gender differs with his or her sex, that their child be so identified while at school.”

The changes mean schools have to ask parents about students’ names, nicknames and pronouns that school staff should use. It also means the school defers to parents on whether a student can get counseling or express a different gender at school.

In contrast, the 2021 model policies said school districts should call students by their preferred gender pronouns and identities without asking their parents.

The Youngkin administration’s changes would also require students to use bathrooms that correspond to their biological sex, “except to the extent that federal law otherwise requires.”

Some critics say Youngkin’s policies would roll back transgender rights and force schools to “out” students to their parents. Supporters argue the policy changes fulfill Youngkin’s campaign promise to support parental rights.

Protesters called for the Virginia Department of Education to revoke the revisions and preserve the existing policies. They also want local school boards to reject the policies.

But Youngkin has defended the policies, saying the previous policies excluded parents and that school boards have to comply with the new guidelines.

“It’s the law,” Youngkin said last week. “I don’t really have a lot of patience for folks who see a law and don’t comply with it.”

The protests were timed to coincide with the start of the 30-day public comment period on the Department of Education’s policies — which opened Monday.

Already, more than 18,000 comments have been posted on the Virginia Regulatory Town Hall’s website with a mix of support and criticism of the changes.

At Loudoun County High School in Leesburg, approximately 60 students walked out the front door at 10:45 a.m. and gathered in front of the school.

The demonstration was organized by 15-year-old student Felicity Banner, whose parents granted permission for the interview.

Banner’s primary concern is for “those who are closeted and do not feel safe, going and telling their parents that they are part of the LGBTQ community.”

Banner, who prefers to use the pronouns they and them, said students who are “outed” by teachers to the child’s parent would be at risk.

“Many students have supporting parents, and they can go home to supportive homes, but there’s also students where school is their safe place. And, if we take that away from them, by taking away their privacy, that can really harm them,” said Banner.

Youngkin’s proposed changes have focused on parents having more control over gender issues discussed with their children.

Banner doesn’t totally disagree with Youngkin on parents being in the loop. “Yes, I agree that parents do need to know what’s happening in their [children’s] schools,” they said, “but transgender teens, non-binary teens, other people of the queer community, they really need to have that safety.”

Starting high school is a challenge for all students, including transgender ones, Banner said. “I was mainly trying to figure out what was going on, and figuring out high school, figuring out myself, and finding friends.”

Asked if there might be a middle ground between the current policies and Youngkin’s new proposals, Banner said, “There probably could be.”

“We need to be able to keep that privacy, because then people can figure themselves out, and when they feel safe, they can go and talk to their parents,” they said.

“It’s really important that we have that freedom, and yes, there could probably be some sort of middle area, but we don’t quite know what that would be yet.”

One of the students protesting today was the daughter of Jeff McKay, the chairman of the Fairfax County Board of Supervisors.

Appearing Tuesday on WTOP’s “DMV Download” podcast, he said he supports rolling back the proposed rules and is proud of the kids for protesting.

“They know what happens in the classroom. They know what stress they’re under. And frankly, they’re concerned about classmates of theirs being targeted,” he said.

Adults should be listening to the kids on this topic, McKay said.

“Our kids are under a lot of stress these days — social media, shootings in schools, COVID learning loss, being away from their loved ones in isolation,” he said. “… And the last thing we should be doing is adding to their stress, adding to their mental health challenges.”

Youngkin addressed the protests in a statement Tuesday afternoon.

“This is about engaging parents in a decision moment, where they belong and the previous model policy unfortunately excluded parents,” he said.

“Here we are today in a world where most important decisions are being made, and there was a policy that excluded parents. That’s just not right. Parents should be absolutely at the center of this discussion with their children … and I think this is for the child’s best interest and for the family’s best interest.

“And I think folks, once they read the policy, will better understand that.”