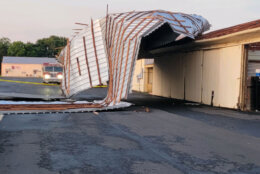 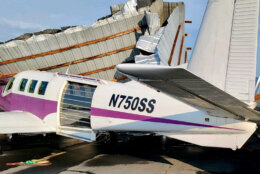 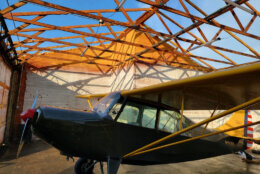 Severe weather swept through parts of Virginia on Wednesday night, and a possible tornado hit an airport in Fauquier County.

Officials at the Warrenton-Fauquier Airport said the storm caused significant damage, tearing the roof off a 200-foot airplane hangar.

“We had an intense rainstorm and it appears that a tornado came down and ripped the roof right off of it,” said Dave Darrah, who manages the airport.

Darrah said the airport has been in contact with the National Weather Service to try to confirm whether it was in fact a tornado. He said he’s sure it was, based on the severe, localized damage and debris field.

“We have lots of debris everywhere,” Darrah said. “Large sections of the roof are laying in several locations.”

Darrah said while damage assessments were ongoing, he expected the cost to top $1 million, in part because an airplane was hit by a 75-foot chunk of debris.

The plane is the type often used by companies to take skydivers up.

The airport is still operating, but the section that was damaged is closed off for a “significant cleanup effort,” he said.

The Warrenton-Fauquier Airport is a general aviation airport with a 5,000-foot runway. It is considered to be a “reliever airport” for the D.C. area, meaning some planes head there in order to avoid the busier, major airports such as Reagan National and Dulles International.