The agreement among Virginia House and Senate negotiators comes amid a rush of action in the final days of the legislative session.
Listen now to WTOP News WTOP.com | Alexa | Google Home | WTOP App | 103.5 FM

Virginia lawmakers are set to approve a 10 cent gas tax increase over the next two years and transportation funding changes that would restore Northern Virginia money cut a few years ago as part of a Metro funding deal.

The agreement among Virginia House and Senate negotiators comes amid a rush of action in the final days of the legislative session.

According to preliminary information provided to WTOP, the deal would include 5 cent gas tax increases this year and next year, then the gas tax would be tied to inflation.

The additional regional gas tax already in place in Northern Virginia, Hampton Roads and along Interstate 81 for local projects would also be expanded to other parts of the state, including the Fredericksburg area.

Gov. Ralph Northam supports the general principles of the plan, and the administration has been involved in negotiations on the bill. Northam’s proposal also includes bond authorizations for I-81 corridor improvements and major rail upgrades along I-95.

The conference agreement, which Northam could still offer tweaks to in coming weeks ahead of April’s reconvened session, would keep annual car inspections but reduce some fees for vehicle registrations.

Top lawmakers were still working late Thursday night to finalize a budget deal, as they aim to meet a Saturday deadline to adjourn the annual session without waiving rules about how long lawmakers have to review the agreement before a vote.

The House and Senate used a procedural move to go into recess overnight rather than adjourning for the day so that they could finish processing bills Friday morning without missing a deadline.

The chambers will adjourn Thursday’s session sometime Friday and then convene to only consider conference reports working out differences between the two chambers.

Agreements on other bills, such as the details of marijuana decriminalization and a minimum wage hike, can be reached any time between now and Saturday afternoon or evening.

Expanded, “universal” background checks will only apply to gun sales, not other gun transfers, under the final language of bills agreed to by the House and Senate.

Under a separate agreement, the return of Virginia’s one handgun per month purchase limit will include an exception for concealed carry permit holders.

Bills sent to Northam’s desk Thursday include changes to provide immunity from drug or alcohol possession charges for people seeking medical help during an overdose; limiting immigration status inquiries; and adding new ways to track people convicted of driving under the influence that will allow them to drive anywhere rather than only restricted routes.

The General Assembly also agreed to require paid sick time for workers at companies with at least 15 employees, to repeal Virginia’s voter ID law and to ban slot-like “skill machines” that have popped up recently in a way that allows facilities like Chuck E. Cheese to remain open.

Other conference reports published Thursday include automatic voter registration, which changes the process from an “opt-in” procedure at the Department of Motor Vehicles to an “opt-out,” and new rules requiring the state to collect data on the use of force by school security officers.

The General Assembly also approved legislation meant to address bills for out-of-network hospital treatment, requiring health insurance to cover care regardless of a person’s gender identity, and providing an opportunity for parole to many people sentenced during the period when juries were not told parole had been abolished.

Lawmakers also banned strip searches of children under 18, except if they are in custody after a series of issues for visitors to state prisons, passed a bill limiting property seizures through forfeiture to only cases where there is a conviction as long as the person submits a written request asking for the property back, and approved raising the minimum age juveniles are automatically tried as adults for some crimes from 14 to 16.

Beginning this November, absentee ballots that are postmarked by Election Day and received in the days immediately following would be counted in Virginia for the first time.

Courts could also defer disposition of cases of defendants with autism or intellectual disabilities, and school mold testing would be required starting next year.

The House voted down a bill that would allow Dominion Energy to charge ratepayers for later years of an electric school bus program, and the Senate appeared set to approve a bill opposed by Dominion that would provide some additional oversight of certain costs.

The House put off a vote late Thursday on a potential change to how Virginia handles redistricting next year.

Supporters of the amendment say that though it is not perfect and is not nonpartisan, it at least lays out a bipartisan process that could be used if voters approve the amendment this fall.

Under the amendment, if the panel does not agree on maps, then the Virginia Supreme Court would draw the lines.

The amendment language was approved right at the end of last year’s session after it became clear an original proposal would not be able to pass. The exact same language must be approved this year in order for an amendment to be presented to voters this fall in time for next year’s redistricting process.

If the amendment is not approved, the Virginia General Assembly can lay out its own process to draw lines for the House of Delegates, state Senate and Congress.

The alternative could be adopted again next year and put to voters in 2022 to apply in 2031 and beyond.

In an emotional debate Wednesday over bills that would allow localities to move or contextualize Confederate monuments, Sen. Mamie Locke, D-Hampton, got so frustrated with those who want to keep protections in place that she had to stop talking and sit down.

Sen. Jennifer McLellan, D-Richmond, another black legislator, tried to explain the hurt from the monuments, which she said simply stand for the “Lost Cause” narrative.

Sen. Amanda Chase, R-Chesterfield County, argued that though Confederates may have had a role in slavery, as people, they also did good things and still have descendants in Virginia today.

Another Republican, Sen. Jen Kiggans, who represents part of Virginia Beach, said allowing the removal of the monuments would simply divide Virginians further.

Locke later said she has had to walk past the “stupid monuments” erected for the Lost Cause for far too long, since the monuments simply say to her that her life and the lives of her black colleagues don’t matter.

Sen. Chap Petersen, a Democrat from Fairfax City with long family roots in Virginia, said hearing from his colleagues convinced him to change his mind and vote for the bill.

The debate Wednesday, which was on a procedural vote in the Senate, even sparked a rare speech on a bill from Lt. Gov. Justin Fairfax as he presided over the Senate. Fairfax called it amazing, ironic and shocking that people continue to repeat racist mistakes of the past, and said the changes for the Confederate statues are much deeper than a simple vote.

The two chambers have to work out language differences.

Lots of action this week

Lawmakers have sent a series of other significant bills to Northam’s desk over the last few days that:

Among the bills that were effectively killed for the year is an effort to require prepaid postage on absentee ballot envelopes.

Otherwise, Northam has already signed a number of bills, including: 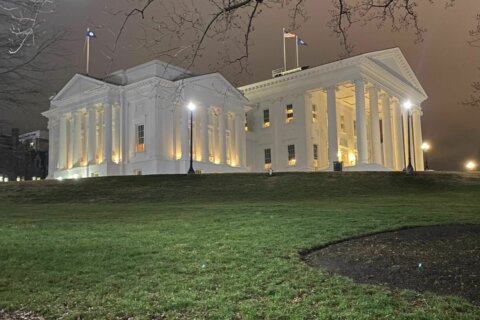