A packed room of advocates on both sides saw party-line votes approve bills that would expand background check requirements to cover private gun sales, restore Virginia’s one handgun per month purchase law for most people, create a new “red flag” law to allow for temporary removal of guns from people who pose a threat to themselves or others, and allow local governments to restrict guns in public buildings, parks or at and near permitted events.

Democrats are trying to take action quickly, since addressing gun violence is a key priority.

The National Rifle Association urged opponents of the measures to crowd the Capitol on Monday, and a separate pro-gun rally that has prompted security concerns is scheduled next week.

The crowds Monday morning, along with increased security measures that began with the start of session last week and a new policy adopted late Friday banning guns in the Capitol and neighboring office buildings, led to long lines at security checkpoints.

Bills could still be amended

The bills that advanced Monday could pass the Senate by the end of the week, but they likely remain far from the final forms that are expected to be signed into law.

“This is the beginning of a process,” said state Sen. Chap Petersen, D-Fairfax.

The committee approved his amendment to the universal background check bill that would have the new requirements apply to any private gun sales for cash or other things of value but would not apply to other gun transfers.

“This is not a partisan issue, but rather a public safety issue, and will help to ensure that Virginia is part of the solution around preventing gun violence rather than part of the problem,” Lucas said.

Petersen’s amendment also reduced the proposed penalty for violations from a felony to a misdemeanor. “You cannot solve social problems by making things felonies,” Petersen said.

The proposed one handgun per month law includes exemptions allowed under Virginia’s past law for concealed carry holders.

“For 19 years, while this law was in place prior to 2012, public safety was enhanced not only in Virginia but in our neighboring states as well,” said Sen. Mamie Locke, D-Hampton.

The extreme risk protection order bill approved by the committee would only allow law enforcement or local prosecutors to seek an order under the red flag law.

“That will allow the temporary removal of a firearm from someone who is an imminent risk to use the firearm to kill or harm themselves or someone else,” said Sen. George Barker, D-Fairfax County.

Friends or neighbors could call police to seek an investigation and the removal, but would not be able to go to a court themselves. That would block frivolous efforts from disgruntled neighbors or family members, Barker said.

Republicans on the committee unanimously voted against the bill.

“It is the law-abiding citizens whose rights are going to be affected by this,” Sen. Mark Obenshain, R-Harrisonburg, said as supporters of the bills in the audience shook their heads.

He called the local government authority to ban guns at permitted events such as the 2017 rallies in Charlottesville simply about appearance rather than safety.

“There haven’t been any problems with gun owners carrying in these various places,” Virginia Citizens Defense League leader Philip Van Cleave said, leading to laughter from some people who came to support the bill.

Besides Charlottesville, Democrats cited people openly carrying weapons, such as AR-15s, as they stood in support of Confederate monuments elsewhere in the state, and concerns raised by people who saw similar shows of force at a Northern Virginia farmers market.

“Allowing localities to restrict the use of firearms at permitted events will make participants, bystanders, communities and law enforcement agencies safer,” Virginia Attorney General Mark Herring said in a statement.

Republicans argued that restricting guns in any way could restrict gun owners’ ability to defend themselves from unknown threats.

“Are we asking our law enforcement, Mr. Chairman, to go up Ruby Ridge Drive and to beat down that door and find out what’s on the other side of it in the privacy of that man or woman’s home?” Chafin said.

Other Republican state senators on the committee raised similar concerns.

“You’re flipping due process and the constitution on its head,” Sen. Richard Stuart, R-Montross, said.

The process requires evidence and later a hearing before a judge, Sen. Scott Surovell, D-Fairfax County, pointed out.

“These bills that we have passed … are supported by upwards of 80% of the public. These are not bills that are outrageous,” Surovell said, prompting some cheers and jeers in the room.

Democrats did strike one proposed bill that would have banned assault weapons. 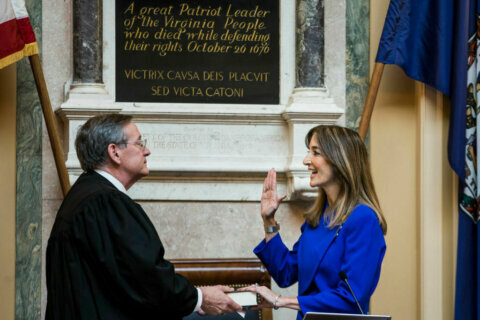