Gun safety measures are expected to be a major issue in Virginia’s General Assembly session, a prospect that has helped pro-gun groups drive up sales and protests ahead of the new Democratic majority gaveling in on Wednesday.

With Democrats now in control of the Virginia House, Senate and governor’s mansion, a number of gun-related bills that quietly failed in subcommittees for years — or that were rapidly dismissed during a special session on gun violence following last year’s mass shooting in Virginia Beach — are expected to become law.

Among the measures likely to move forward: a return to Virginia’s one-handgun-per-month purchase policy; red flag laws; and universal background checks for all gun sales except those among immediate family members, through inheritance or antiques.

Red flag laws provide a way to temporarily remove one’s access to guns if friends, family members or others can show that the person is a threat to themselves or others.

Virginia could also get more time to do buyer background checks for dealers, with five days for state police to provide a response to dealers rather than one day. That bill would also eliminate current permission for a dealer to complete the sale if the state police background check system is backed up.

Related FAQs: What is happening with gun legislation in Virginia?

Several bills also call for studies of the personal and economic impact of gun violence on Virginians, or for new support funds for shooting victims as well as prevention funds aimed at reducing violence.

“I think there’s a lot of common sense things that we can do that we can find some common ground on: universal background checks … a red flag law … and letting localities make some decisions for themselves,” said Democratic state Sen. Jennifer Boysko, who represents parts of Fairfax and Loudoun counties.

Boysko, who is originally from Alabama, added: “I come from the Deep South and grew up around guns. I don’t think we need to be afraid of one another.”

On the floor, even some Republicans are likely to vote for some measures, such as expanding background checks, Senate Minority Leader Tommy Norment said last week, according to WAVY-TV.

About 250 people wearing orange stickers saying “guns save lives” turned out to express deep-seated fears that their guns could somehow be taken away or otherwise restricted in ways they find unacceptable.

“I don’t discount that at all,” said Del. Ken Plum of Reston. He is the longest serving member of the House of Delegates.

Ongoing misinformation and falsehoods online about the upcoming session — plus the large turnout — led to a heavier-than-usual police presence Saturday amid an increasing number of threats against lawmakers.

At the annual pre-session hearing, the pro-gun crowd vastly outnumbered the more typical speakers who asked for other specific policy or funding changes. There were also a number of people who cheered requests for gun control or gun safety measures.

The pro-gun crowds that packed the Board of Supervisors’ Auditorium and who attended other pre-session events this weekend were similar to those driven by online postings from the Virginia Citizens Defense League, which has turned out to city and county meetings since the sweeping Democratic victory in November to push for ceremonial “Second Amendment sanctuary” resolutions.

One man even stormed out of the building as Fairfax County School Board Chair Karen Corbett Sanders told legislators about the need for education funding. He yelled at pro-gun organizers about why anyone was allowed to talk about anything besides guns.

Around Capitol Square in Richmond, Sen. Adam Ebbin proposes a ban on the carrying of weapons, including guns and knives. The change could also be incorporated sooner into General Assembly rules, which could restrict weapons during major rallies on either side scheduled for Jan. 20.

A separate bill would ban weapons in state office buildings anywhere in the commonwealth.

Other proposals include possible bans on large magazines; banning plastic or 3D printed guns; a ban on “bump stocks”; expanded bans on carrying certain loaded shotguns or rifles; and limitations or bans on the sale of “assault firearms,” which would be defined as certain semi-automatic guns mainly that can shoot more than 10 rounds.

Gov. Ralph Northam’s administration is considering assault weapon registration requirements for current owners, who would be grandfathered in under any ban.

Local governments could also get permission to implement their own rules about possessing, carrying and transporting of guns or ammunition in places such as parks or libraries, and get a new option of destroying guns received in gun buyback programs rather than reselling them to dealers at auction.

A change in the wake of the 2017 white nationalist rally around Confederate monuments in Charlottesville would also provide new authority to local governments to ban guns at permitted events or at events that otherwise require a permit.

A separate bill would add a new definition to the state’s ban on paramilitary activity to include assembling with one or more people “with the intent of intimidating any person or group of persons by drilling, parading, or marching with any firearm, any explosive or incendiary device, or any components or combination thereof.”

Lawmakers will also consider raising the minimum age to purchase a gun from 18 to 21; toughening the penalty for leaving a loaded, unsecured gun around someone younger than 14, and expanding the current penalty to cover all minors; and requiring additional dealer reporting of gun sales involving multiple weapons.

Virginia could also require gun owners to report a lost or stolen non-antique gun within 24 hours; make it illegal for a fugitive to have or buy a gun; bar anyone subject to a long-term protective order due to violence, force or threat from having a gun while the order is in effect; or make it illegal for anyone convicted of a misdemeanor hate crime or domestic violence to own a gun without court approval.

Two bills would add preschools, other than home-based day cares, to the list of locations where guns are banned, or add a gun ban on all elementary, middle or high school property. Today, a weapons ban on school properties has an exception for guns and ammunition.

State Sen. Emmett Hanger, a Republican, has proposed allowing concealed carry holders to possess a stun gun on school property as long as the person stays in their car in the parking lot or pickup line.

Other ideas include a ban on drinking alcohol while carrying a weapon in a public space, and clarifications to ensure people involuntarily committed to a mental institution cannot have a gun until a court clears them.

Some sponsors have already said the bills will probably be amended during the session following discussions with lawmakers on both sides of the aisle and those interested in the legislation.
Additional bills can also still be proposed through the early part of the session.

The session only runs 60 days.

Several Republicans have proposed gun-related bills of their own.

Norment proposes requiring gun safety education for students in all grades in all schools for a minimum of two hours, with the classes taught by a law enforcement or military instructor. The classes would not actually use guns though. Current law allows the programs in elementary schools, if local school boards choose to have them, with no specific restriction on gun use.

A bipartisan effort could also remove the option of online training for concealed handgun permit training to instead require existing in-person training or a demonstration of competence.

State Del. Bobby Orrock has also proposed a bill that would require every person buying a gun from a dealer to demonstrate competence with a gun as required for concealed carry weapons permit holders.

Other Republicans have proposed bills unlikely to pass, including allowing concealed carry without a permit, attempting to block any “gun-free” zones and repealing a limited ban on certain people carrying weapons in churches or other houses of worship.

Sen. Bill DeSteph proposed a number of bills setting mandatory minimum prison terms for pointing a gun at a police officer, having a concealed weapon during the commission of a felony, stealing a gun, shooting at a house or school or shooting from a car.

One Democratic bill that would loosen current restrictions would remove the requirement a sworn law enforcement officer be employed full-time when retiring in order to buy his or her service handgun.

In a ceremonial measure, the General Assembly could also designate June 1 each year as Gun Violence Awareness Day.

Some gun-related bills are more procedural or focused on hunting.

Virginia could offer a new special license for hunting elk, and could implement a new additional one- to five-year ban on anyone suspended from hunting, fishing or trapping if they violate the law again.

Along the U.S. Route 1 corridor in Fairfax County, a new bill could limit the use of hunting blinds in the Little Hunting Creek area. The bill would block the state licensing of stationary duck or waterfowl blinds anywhere a local government bans the hunting of birds with a gun. 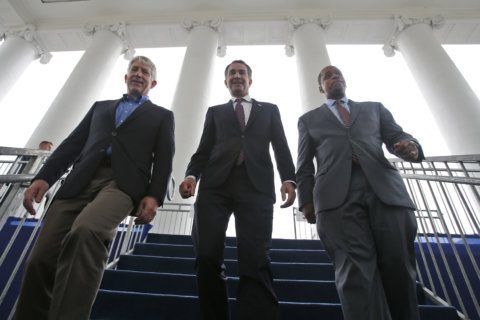