Thousands are expected to show up for a pro-gun-rights event around Virginia's Capitol on Lobby Day. Given the contentious nature of the issue, the prospect of such a large event has raised tensions, and recent arrests have further raised them. Here’s what you need to know.
Listen now to WTOP News WTOP.com | Alexa | Google Home | WTOP App | 103.5 FM

And this year, with Gov. Ralph Northam and a Democratic majority set to roll out tighter gun-safety legislation, gun-rights proponents plan to turn out in numbers around the Capitol to press their case against it. (Read more about those proposals in WTOP’s FAQ.)

Tens of thousands are expected to show up for the event Monday in Richmond.

Given the contentious nature of the issue, the prospect of such a large event has raised tensions. Earlier, Northam declared a state of emergency. And recent arrests have further raised those tensions.

Who is organizing this?

The Virginia Citizens Defense League, which insists the rally is a “peaceful event about gun rights.”

The league has advocated for what are called “Second Amendment sanctuary” resolutions in over 130 counties and municipalities around the commonwealth. Though such measures carry no legal weight, they are still a defiant gesture against tighter legislation.

Here’s a look at the expected participants in Monday’s rally.

Where/when will it be?

Monday morning around the Capitol grounds (see below for a map of the area).

According to the league, participants should meet at 8 a.m. at 10th and Bank streets. Lobbying “teams” will be formed and will enter the nearby Pocahontas Building with a “team leader” to meet with state legislators in their offices.

A rally follows at 11 a.m. and is scheduled to wrap up at noon.

Gun-safety advocates had planned a vigil later in the day but canceled it.

Why the state of emergency?

“Credible threats of violence surrounding the event, along with white nationalist rhetoric and plans by out-of-state militia groups to attend,” per a statement issued by Northam’s office Wednesday.

The executive order declaring the state of emergency contends that “a substantial number of these demonstrators are expected to come from outside the commonwealth, may be armed, and have as their purpose not peaceful assembly but violence, rioting, and insurrection.”

The arrest Thursday of a Canadian national and two Maryland residents reinforced those concerns — nearly three years after white supremacists descended on Charlottesville and clashed with counterprotesters.

The three men arrested are reportedly members of a white supremacist network called The Base, which the Counter Extremism Project calls “an accelerationist group” that encourages anarchy so it can “impose order from chaos.” The network distributes “manuals for lone-wolf terror attacks, bomb-making, counter-surveillance, and guerrilla warfare.”

Could participants be armed?

That depends on where you are. Weapons are banned in the Capitol and General Assembly buildings, as well as the executive branch office buildings.

Under the state of emergency, firearms and other weapons have been banned from state property on the block surrounding the Capitol. The ban begins at 5 p.m. Friday and remains in effect until 5 p.m. Tuesday.

In addition to guns, banned items include …

The VCDL and another group, the Gunowners of America, sought an injunction against the firearms ban, but the courts upheld it.

Outside of the state property on the block surrounding the Capitol, current Virginia gun laws will apply:

What other safety measures will be in place?

The Federal Aviation Administration has imposed flight restrictions over Richmond on Monday, because of concerns about a weaponized drone attack.

In addtion, several streets will be closed around the area.

And access to Capitol Square will be limited to one secure entrance at Ninth and Grace streets. Metal detectors will be used. Also, three exits have been designated along Ninth and Bank streets. (Click below to enlarge.) 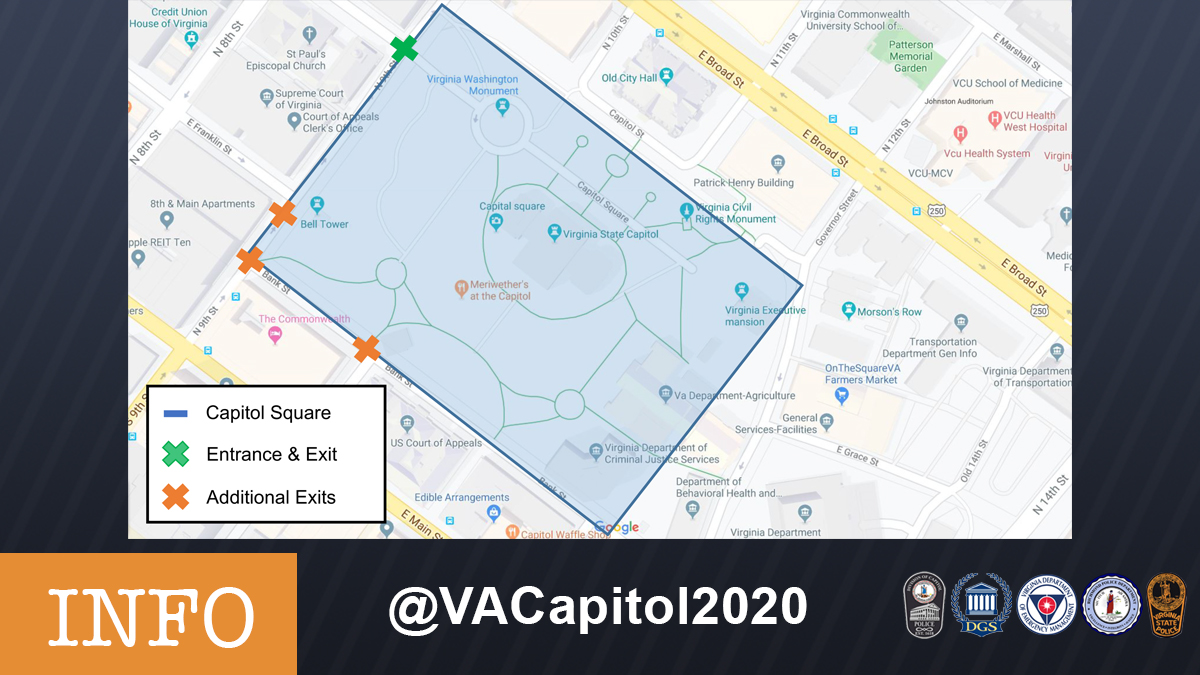 Virginia State Police, the Richmond Police Department and Capitol Police say they’ll be coordinating throughout the day to ensure a safe event.

Follow @VACapitol2020 for the latest safety information for Lobby Day.