Authorities: 19 hospitalized after bus hits tractor trailer on I-64 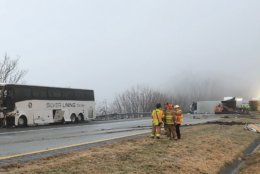 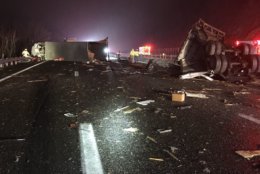 Authorities say more than a dozen people have been hospitalized in Virginia after a commercial bus hit an overturned tractor trailer on Interstate 64 Sunday morning.

Virginia State Police said the Afton Mountain crash happened around 4 a.m. in the eastbound lanes of I-64 at the 100 mile marker, located in Nelson County near the Augusta County line.

The tractor-trailer was traveling east on I-64 when the driver lost control and the truck overturned across the roadway. The chartered bus, which was also traveling eastbound, could not avoid the the tractor-trailer. The crash split the trailer in half. The bus went off the right side of the highway and stopped against a guardrail.

The driver of the tractor-trailer, James Proffitt, 44, of Suffolk, Virginia, was transported to the U.Va. Medical Center in Charlottesville for serious injuries, according to police.

The driver of the bus, Andrew Burruss, 62, of Keswick, Virginia, was also taken to the U.Va. medical center for treatment.

Police said 13 others were taken to the U.Va. medical center for treatment of injuries ranging from minor to serious, though none were initially deemed to be life-threatening. Four others were taken to Augusta Health Medical Center. There were 20 people aboard the chartered bus.

Virginia State Police said the crash on I-64 was likely caused by ice and heavy fog.