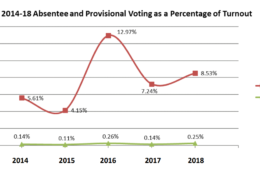 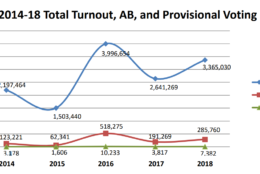 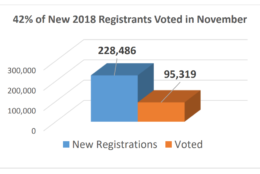 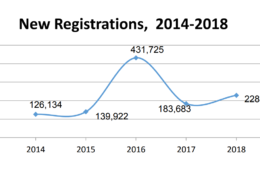 WASHINGTON — Long lines in Prince William County and thousands of absentee ballots that arrived too late to be counted are among the issues in November’s election that Virginia hopes to fix in the future.

Overall, a state Department of Elections report concludes that the election — with 3.3 million votes cast — went well, but that there is always room for improvement.

“General registrars, Electoral Board members, and the Department of Elections will take the story of 2018, learn its lessons, and plan for improvements going into the 2019 General Assembly elections and the presidential election in 2020,” the report said.

The lessons learned include the need for more than the minimum number of elections officers and voting equipment, training for poll workers to clear paper jams, and improvements to the absentee ballot process to make sure all those sent in arrive in time to be counted.

More than 6,770 absentee ballots were returned after polls closed Nov. 6, which means they could not be counted, the report found.

Nearly all of those late ballots came through the mail, which is a growing concern as the state continues to see increased absentee voting.

In Virginia, the postmark on an absentee ballot generally does not matter, only the time it arrives at the local registrar’s office.

“The Department will work with general registrars in an attempt to determine if there are patterns that exist preventing the timely return of ballots,” the report said.

Prince William, Chesterfield and Henrico counties accounted for more than half of complaints to the state on Election Day.

Complaints were most likely to be focused on long lines.

In Prince William County, the state linked the problems to understaffing and not enough voting equipment for the number of people casting ballots in the growing county.

“Having only one voting machine/scanner in each polling location (as Prince William County did) combined with a high voter turnout created a situation where voters were waiting to cast their ballots after having marked them. The wait at the scanner resulted in a wait at voter check-in, thus resulting in long lines,” the report found.

Prince William County elections officials would like to have provided more poll workers and voting equipment, but would need a significant amount of additional money from the county to do it.
Local officials actually run and fund Virginia’s elections, with oversight and assistance from the state.

In Chesterfield, where Republicans in particular have complained about long lines and other issues, key problems included election officers who didn’t show up on Election Day and significantly fewer poll books to check voters in than needed.

The election officers who failed to show up meant a number of precincts were short-staffed. Other precincts ran out of ballots or opened late.

At the end of the day, a judge ordered two precincts to stay open late, but the order did not come until after those precincts had already closed, so the lines were gone by the time they reopened.
Chesterfield is part of the 7th Congressional District where Rep. Dave Brat lost to Democrat Abigail Spanberger.

In the future, the state will recommend that each locality have trained technicians with a vehicle loaded with spare equipment, ballots and envelopes on standby each Election Day. Some areas already do that.

Chesterfield is planning to complete its own report on the problems soon. It was the focus of more complaints to the state than any other jurisdiction on Election Day.

In Henrico County, the issues were largely tied to paper jams.

The rainy weather led to wet ballots that did not slide smoothly through scanners. While other areas allowed elections officers to clear those paper jams, Henrico did not, so lines quickly grew.

Long lines could be an issue in many parts of the state during the 2020 presidential election without some additional changes, because dozens of precincts now have more than the 5,000-voter cap in state law, and more than 200 others are close to that cap. Fairfax County has 29 precincts with more than 4,500 voters. Alexandria has seven, Prince William has five, Arlington has three, Spotsylvania has four and Fredericksburg has one.

Forty-two percent of those newly registered cast ballots in November.

Some local electoral boards and elections officials failed to file proper paperwork though for things like the completion of records to ensure the fact a person voted, or a voter credit, shows up in their permanent files.

In Hopewell, where there were shouting matches over ballot problems and electoral board members forced out earlier this year, the local officials may have illegally issued an absentee ballot on Election Day.

The report also found they failed to use state results forms and failed to provide accurate results for the state’s constitutional amendments until just 30 minutes before the State Board of Elections was scheduled to certify the election.

Separately Friday, the State Board of Elections fined a former Prince William County Democratic Committee chairman $500 for last-minute “Republicans for Stanley Bender” signs in the school board chair election. Bender, the third candidate in the race, was not endorsed by either the Democratic or Republican committees, and he said he did not authorize the signs.

On the ballot, candidates for local offices like school board are not labeled with their party affiliation in Virginia.

State sees spike in calls to hotlines for domestic violence