Coronavirus News: Fairfax Co. votes to increase substitute teacher pay | Is it time to get a COVID-19 booster? Which one? | Local cases of COVID-19 | How many in DC region are vaccinated?
Home » Local Politics and Elections News » House election results reflect…

WASHINGTON — Tuesday’s election saw the Democrats gain three seats in the U.S. House from Virginia, neatly flipping the commonwealth’s representation from 7-4 Republican to 7-4 Democratic. And all three of the Democratic candidates who unseated Republicans were women.

In the 2nd District, Democrat Elaine Luria beat Republican incumbent Scott Taylor by 2.2 percent, after Taylor won by 22.9 percent in 2016 – a 25 percent swing that was among the largest of the night.

In the 7th District, Abigail Spanberger topped David Brat by 1.4 percent of the vote, after Brat won in 2016 by 15.3 points.

“In the midterm election years, and even in presidential election years, you tend not to see more than one or two races that are competitive in Virginia,” said Mark Rozell, founding dean of the Schar School of Policy and Government at George Mason University. This year, he noted, there were four.

Rozell told WTOP on Wednesday that Tuesday’s results represent “quite a significant shift in Virginia politics.”

Toni-Michelle Travis, a professor of government and politics at the Schar School and editor of The Almanac of Virginia politics, agreed it was “a big shift” for a state that didn’t send its first woman to Congress until 1992.

Official turnout numbers aren’t available yet, but reports all through Election Day noted a surge of voters at the polls, and a look at the unofficial vote totals in the 2nd, 7th and 10th show each district with at least 100,000 more votes cast Tuesday than in the House race in the midterm election of 2014.

That’s due in part to a higher percentage of people coming out to vote and part a surge in population, Travis said.

“Loudoun is the fastest-growing county in Virginia and, I think, the sixth-fastest in the country,” Travis said. “ … And in-migrants are not necessarily of a conservative nature or an older Virginia perspective at all. They’re very cosmopolitan and very diverse in background.”

In Arlington County, over 70 percent of registered voters cast ballots, and more votes were cast than in any other non-presidential election in the county’s history. Fairfax County’s overall turnout this year was 69.8 percent, far above a typical midterm election. And In Loudoun County, turnout was 65.9 percent — the highest midterm turnout since 1994.

More than a few analysts have pointed to the effect President Donald Trump had on Republicans’ chances in Tuesday’s elections, but Rozell says there’s a more local factor as well — Corey Stewart, who ran a self-described “vicious” campaign and was trounced in the U.S. Senate race by Democratic incumbent Tim Kaine. That race “possibly was a drag on the candidates down-ticket,” particularly in the 7th and 2nd districts, Rozell said.

Travis agreed, saying that “Corey Stewart was very divisive, and I think parents are trying to teach their children that it’s a very diverse world, and we have to get along with people who may be different from us in any number of ways.” Of Trump, she said, “I think he has no respect for females.”

She added that the issue of health care was key to understanding Tuesday’s election, particularly where women are involved as voters or candidates: “I think there are certain issues that are key to them — anything having to do with health care, because they are expected to raise the children and take care of the grandparents. … That’s becoming our biggest expense in our budgets now.”

The results show the GOP has changed, Rozell said. “The Republican Party has narrowed its appeal,” he added, noting that no Republican has won a statewide race since 2009, and now that won’t change until 2020 at least.

“Back in the ‘90s, when we were having these conversations, we were talking about a dominant Republican Party in Virginia,” Rozell said, “and many were projecting that that was going to be the long-term status of the party.”

Urban areas went heavily Democratic on Tuesday, Rozell said, while suburbs leaned Democratic and rural areas were heavily Republican. That was in play in the 5th District, which Rozell said is about two-thirds rural and where Republican Denver Riggleman beat Democrat Leslie Cockburn by “a fairly comfortable margin, but it was still considered somewhat competitive.” Even where Republicans won, Democratic House candidates in Virginia outperformed their 2016 vote percentages in every district.

And the preponderance of women candidates looks to be the future, both experts said. More than 100 women won House seats nationwide Tuesday night, a record; the three representatives from Virginia are a record, and that comes a year after a record number of women were sent to Virginia’s General Assembly.

“Virginia is changing,” Travis said, “and I don’t think we can count it in either column definitely. It’s going to be in flux as we move ahead, as people move into Virginia and as women begin to get a voting record that they will be challenged on.”

Rozell said the development “really shows that the gender composition of the delegation now is significantly changing. Voters are looking for more diversity, I think, in the House of Representatives … and I suppose you could say Virginia showed the way.” Virginia, Maryland, DC turnout up, but it falls short of presidential-year levels 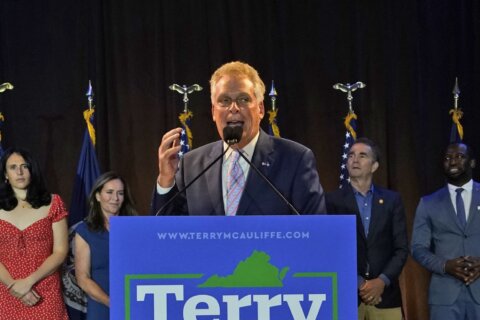