WASHINGTON — Broken down railcars are to blame for most of Metro’s unplanned delays, a sign the transit agency’s fleet performance is “poor and inconsistent,” Metro’s chief operating officer said.

Joe Leader said during a Metro Board committee meeting on Thursday that in 2016 an average of eight Metro trains each day did not go into service at the beginning of their lines due to railcar problems.

He said an additional four trains each day were going out-of-service mid-route forcing riders to offload onto sometimes already packed platforms and leading to longer waits.

“Certainly for Metro riders I know offload is a bad, bad word and anybody who’s gone through it, it’s not just an inconvenience, but it’s often a safety issue also as we end up with overcrowded platforms and other things that make me very nervous,” Lauby said. “I’ve been offloaded and have felt the need to leave the station just because of too many people and too much chance of things going wrong.”

Metro is more than a quarter of the way through a new round of annual inspections and focused maintenance on its 740 middle-aged cars. The work is meant to cut down on door, brake, air conditioning and other problems.

Leader said Metro could target other systems that cause problems in railcars after this round of maintenance is finished.

“Staff are reviewing our railcar fleet inspection intervals to ensure we perform the right level of inspection at the right time,” he said.

Leader said Metro was counting on the new 7000 Series trains to help, too, but the railcars weren’t meeting standards set in the agency’s contract with Kawasaki, the manufacturer.

“However, they are improving,” Leader said. “In December of 2016, the MDBF was just short of 11,000 miles, so they are starting to go in a positive direction.”

Most months in 2016, at least 85 percent of the new cars were available for service, as required under the contract.

Metro had 32 trains worth of cars commissioned for service by the start of the year and is still receiving 20 new cars per month.

The window has narrowed for Metro to correct problems before they have a major impact on riders, Leader said, which could be exacerbating the impact of the increase in car breakdowns.

According to Leader, Metro never updated its schedules after implementing a safety rule a few years ago that requires train operators to wait 5 seconds before opening the doors. The rule was implemented with the goal of cutting down on the number of times train operators opened doors on the wrong side of the train.

“We have never adjusted our schedules for that,” Leader said. “So if you have 20-something stations on the Red Line, you add that up, you’ve already lost about two minutes. So if you have a delay in service at one station, you have two minutes to kind of correct it, and, if you don’t, it’s going to hurt you.”

Metro measures delays beginning with trains that are four minutes late when they reach the end of the line.

“The majority of our delays are between the 4- and 6-minute mark,” Leader said. “We’re almost there, so we’re looking at definitions.”

Metro plans to significantly reduce scheduled service at all times of day, if the Metro Board approves the proposed budget for the year beginning in July. The reductions would reduce the volume of scheduled trains and could reduce the ripple effects that a brief problem at an individual station could cause.

That change is separate from the cut in hours that has already been approved to begin this summer.

Leader, who was hired in 2016 after a long career in New York, said he was surprised by the fact that Metro has no systemic program to regularly overhaul railcars and said he believes setting such a program is crucial to extending the life and reliability of Metro trains.

“When I look at the rail, for some reason we opted out of this type of work and the result is what you see today. And this is something we need to look at and begin planning for right now,” Leader said.

Meantime, Metro is holding “maintenance boot camps” to train less-experienced mechanics on how to do their jobs. The agency is planning to add new training based on how mechanics do on computerized tests and training.

Metro has moved a top bus maintenance manager to the rail side to develop new training programs, but there are still challenges because of all of the nuances of each of Metro’s different sets of cars.

“When we begin looking at the 7000 Series, again that’s just a different animal,” Leader said. “The trains are more high-tech, so, again, it’s just going to be retooling the mechanics to ensure that they’re able to troubleshoot and make the repairs as necessary. So we’re going to be going through a transition trying to get our mechanics up to speed to make sure that we can maintain our legacy fleet, as well as begin training them and ensuring that they can maintain our 7000 Series fleet.”

In rail yards, Metro is now working outside of the maintenance shops to identify the problems with broken down trains before trying to fix them.

In the past, cars could be brought into a shop and raised on a lift, where mechanics would find that a fix required parts or mechanics with expertise that were unavailable.

“We just wasted manpower, as well as we wasted shop space, so what we do is we perform a triage in the yard track to make sure we’ve identified what the subsystem is, that we have the parts available, then we begin to plan to make sure we have the right mechanics on duty as well as the shop space and the lift space that is needed,” Leader said.

To avoid issues as trains head out to start a run, Metro is also now trying to make yard technicians available to troubleshoot issues when trains are leaving yard.

Leader also wants to shift cars around so that trains will be composed entirely of cars built around the same time, because the different series of cars have different technologies that can increase the chances of failures.

Currently, Metro puts the 1000 Series cars in the middle of trains because of National Transportation Safety Board warnings about the dangers of the cars in a crash and due to riders’ concerns that those risks are raised if the cars are at the front or rear of a train.

This fall, Metro made the same switch for 4000 Series cars after realizing that required annual testing to be sure the cars are working properly when leading a train had never been done. The 4000 Series regularly have other issues, such as door problems, that are believed to be separate, but that make them the most likely in the fleet to break down.

Leader said having those 4000 Series cars intermixed with others ends up bringing down the reliability of the entire railcar fleet.

The 1000 Series cars are due to be retired this year. Leader said Metro was working to set a date for complete retirement of the 4000 Series cars. 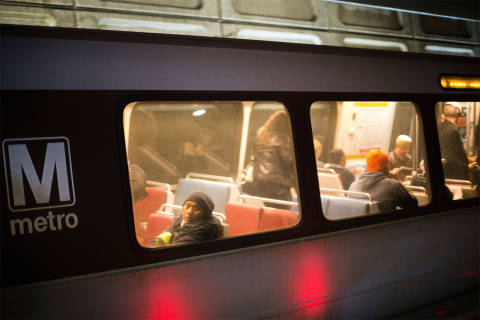