A Metro train has derailed outside the Silver Spring Metro station on Tuesday. This is a developing story.
Listen now to WTOP News WTOP.com | Alexa | Google Home | WTOP App | 103.5 FM
(1/4) 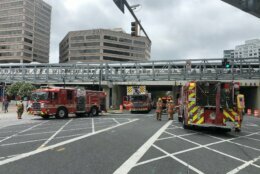 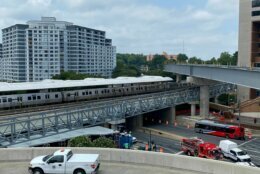 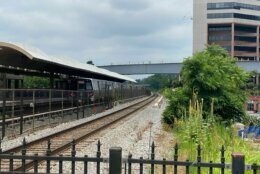 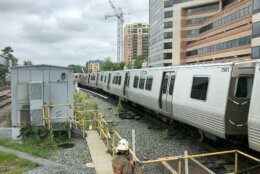 Metro riders should expect delays after an outbound Red Line train derailed outside the Silver Spring station, on Colesville Road, on Tuesday morning.

Montgomery County Fire and Rescue Service said the train derailed at low speed at the platform and that no one was hurt. Spokesman Pete Piringer said it took a while to get the conductor and one passenger off the train because the doors were jammed.

“Things were pretty stable when I left the platform,” Piringer said.

Metro said in a statement Tuesday afternoon that the Glenmont-bound train was leaving the station at about 11:20 a.m., and that six of the eight cars had not cleared the platform when the train stopped, so most passengers were able to get out through the regular doors.

The agency said the train operator was taken for routine post-incident testing, and that they expect that single-tracking can be restored in the afternoon.

Metro added that “current information does not indicate any conditions or failures related to infrastructure or equipment,” though they’ll continue to investigate.

The Washington Metrorail Safety Commission said in a statement later Tuesday that, while they continue to investigate, initially, it appears that the first car passed a red signal and entered a center track, while the second car continued forward and fell off the tracks.

Service has been suspended between the Takoma and Wheaton stations. Georgia Avenue, Colesville Road and the East-West Highway had been blocked, but have since reopened.

“I imagine it’d be a while” before Metro can get things up and running, Piringer said.

Metro has said that a number of shuttle buses and alternative routes are set up.

The incident is the second on the Red Line on Tuesday: Service was restored at about 2 p.m. between Van Ness and Dupont Circle after having been closed for hours due to flooding.