Metro is showing its team spirit and adding a Washington Nationals World Series hat as part of its employees’ official uniform this weekend.

The transit system hopes that its promise to keep trains running for fans leaving Nationals Park will lead to a bump in ridership. Metro will keep Navy Yard-Ballpark station open with service in both directions for at least 20 minutes after the final out.

For Games 3 and 4 on Friday and Saturday nights, the extra service may or may not be needed since the system closes around 1 a.m.

But, what if the Nats don’t sweep?

Then Metro is planning for Game 5 on Sunday that will be played in D.C. Metro closes at 11 p.m. on Sundays, and a fifth game would require extra service.

Pepco has agreed to pay Metro for two additional hours of service Sunday systemwide if there is a Game 5, extending the closing time to 1 a.m.

And, even with that extension, Metro would keep trains running beyond that at Navy Yard-Ballpark station on the Green Line for 20 minutes after the game ends.

Metro is also opening early Sunday morning for the Marine Corps Marathon, and it has not scheduled any major track work this weekend.

Maryland’s MARC Train is promising similar postgame service, with a train leaving Union Station for Baltimore Penn Station on the Penn Line one hour after the final out of each home game. The train is scheduled to make all stops between D.C. and Baltimore.

Metro has printed baseball-themed signs to hand out to riders that have “Finish the Fight” on one side and “Doo” on the other, along with Metro logos.

The agency is also distributing black World Series hats with a white curly W on a red diamond background to bus operators, train operators and station managers on the job this weekend.

“We bought them, and I think it’s important that you know we’re a part of the community,” said Metro General Manager Paul Wiedefeld.

“We want our customers to celebrate; we want our employees to celebrate at the same time. Our employees are going to be working very hard at very short notice to come in to do a lot of work, so we want them to be part of the experience, as well,” he said.

The Nats did not contribute to the hats or to any of the extra service Metro has provided during the playoff run. “We have not seen any dollars from the Nationals yet,” Wiedefeld said.

If the Nats do win, D.C. is expected to hold a parade. A person familiar with the matter said preliminary parade planning is underway at the D.C. government level and among transportation officials.

“We’re doing contingency plans for all kinds of things, but I’m not jinxing anybody,” Wiedefeld said. 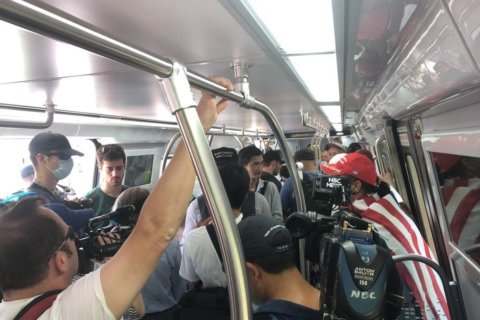 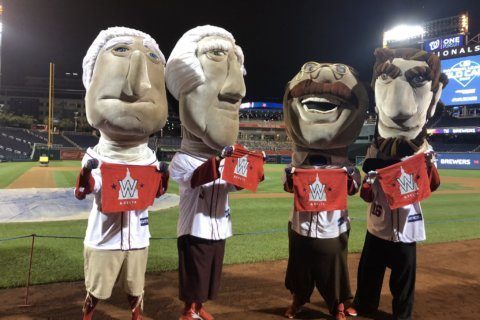