For Northern Virginia commuters considering biking to work during Metro's monthslong shutdown of the Blue and Yellow Lines south of Reagan National Airport, there are many resources that can help them get started. Here are a few.
Listen now to WTOP News WTOP.com | Alexa | Google Home | WTOP App | 103.5 FM

Now that Metro has shut down service on the Yellow and Blue Lines south of Reagan National Airport in Virginia for the next three months, commuters are trying out different ways to get to work. For some, that plan means getting on a bike.

Josephine Liu is the vice chair for bicycling with the Alexandria Bicycling and Pedestrian Advisory Committee, and she welcomes those Metro riders who think putting on a bike helmet and hopping on a bike is the best workaround during the three-month Metro shutdown.

BPAC is providing “mentors,” volunteers who offer to show prospective bike commuters the best, safest routes to work by bike.

“I think we’ve had between 13 to 15 people actually go through the process of getting mentors,” Liu said. “A lot of people are figuring it out on their own,” she said.

Liu said that a group called Alexandria Spokeswomen held a ride this month that is designed to give riders a sense of what bike commuting would be like.

“There are a lot of other resources available,” Liu said.

For Liu, who’s been commuting to work in D.C. from Alexandria for the past six years, the bike ride is often the best part of her day. She takes the Mount Vernon Trail, and she describes it as a sometimes magical experience.

“I’ve seen bald eagles on the way to work. I’ve seen an osprey sitting in a tree eating its breakfast just 20 feet away from me,” Liu said.

And, she often sees “bike friends” on the way in, riders she knows from the commute or from social rides.

Brian Crowe, at Conte’s Bike Shop in Alexandria, said that he has had more inquiries from people about bike commuting – about two to three people a day on weekdays and double that on the weekends, leading up to the shutdown.

Crowe’s shop on King Street is just blocks from access to the Mount Vernon Trail. “That connects to both the Four Mile Run Trail and the bridges into D.C,” Crowe said.

He recommends that as a starting point for most commuters.

Crowe said that riders don’t have to make the leap to clipless pedals and go full-on spandex to ride to work.

“There are lots of different types of riders,” Crowe said. “Cycling is for everyone,” and there are bikes and equipment for all kinds of cyclists, he added.

So if riders want to take to two wheels on a hybrid or step-through bike in their work clothes, or if they want to “jump in to the deep end with both feet” and get a road bike, Crowe said, “We can help anybody.”

Both Crowe and Liu said that getting a good light that gives the rider good visibility along trails at night is important, as well as having lights that make the rider visible to motorists.

They agreed that a commute by bike can change the way people feel about that trip to and from work each day. 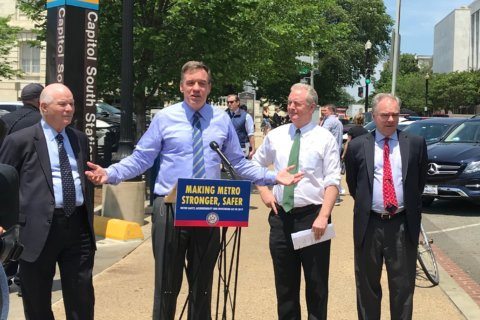