WASHINGTON — The District is set to officially promise Friday morning to provide dedicated tax dollars to Metro, in one of the final steps required to seal a landmark funding deal.

The detailed plan, to be formally approved in early June, would designate a portion of the city’s sales tax for the transit agency. To fill that hole elsewhere in the budget, the District plans to slightly raise taxes on ride-hailing trips through companies like Uber and Lyft, raise a portion of the sales tax, raise the commercial property tax, raise a tax on hotels and restaurants and use revenue reserves.

Final District funding and details of any new taxes are expected through the budget process in the coming weeks.

Ride hailing companies are negotiating the details of any potential tax or fee, which Evans said must generate $18 million per year.

“At no time can you predict how much it costs to ride Uber. I have never been charged the same amount ever when I ride Uber, wherever I go,” Evans said.

Evans, who rarely rides Metro, said he does frequently use Uber.

“We’re adding an additional 35 cents onto a $10 ride. No one will notice that. No passenger will know that, because they have no idea what they’re going to pay anyway and Uber is constantly adding surcharges onto their bills depending on the opportunity of the day,” Evans said.

Virginia’s General Assembly meets Wednesday to finalize its promise of $154 million per year to Metro. Gov. Ralph Northam has proposed amendments that would raise some taxes in jurisdictions served by Metro in order to reduce the amount of funding taken away from other Northern Virginia transportation projects.

Maryland’s General Assembly passed its $167 million share before adjourning April 9 to be provided from the state’s general transportation money.

The shares for each jurisdiction are determined by a pre-existing funding formula.

“It’s ironclad, sustainable,” Evans said. “I mean once we pass this, that’s it.”

“Now we can start to plan in much longer term … and it’ll allow us to get at the range of issues that we have to deal with,” General Manager Paul Wiedefeld said.

Jurisdictions have consistently provided separate existing funding for more than 40 years, and Wiedefeld’s capital plans rely on that separate funding continuing at existing levels as adjusted for inflation each year.

One difference for the newly dedicated tax dollars is that any of that money that is not spent will no longer be returned to the local governments, but instead will stay in a Metro bank account.

Including the existing capital funding that will continue alongside the $500 million per year in new dedicated regional funding, Metro plans $15 billion in work over the next decade based on prioritization and estimates of what can actually get done.

That does not address all of Metro’s issues, though.

For starters, Metro believes the true need is around $25 billion over the next decade if work time on the tracks that disrupts service and money were no object for repairs and upgrades.

Evans said he would build even more if he could.

“We don’t go anywhere, a lot of places that we need to go, but we’re not there yet,” Evans said. “We’re not even at a planning stage of building more Metro, but if was up to me, boy, I’d be building another 100 miles of track.”

Metro also has around $2 billion in unfunded postemployment benefits, the Metro Board’s Finance Committee was told Thursday. Metro has also failed to fully fund its pension programs for years.

The $2 billion other postemployment benefits liability includes benefits that could be paid out over the next 70 years for some employees who only recently started at the agency.

Starting this month, Metro plans to set aside $3 million to start a trust that would eventually help cover some of those liabilities, Metro Chief Financial Officer Dennis Anosike said. 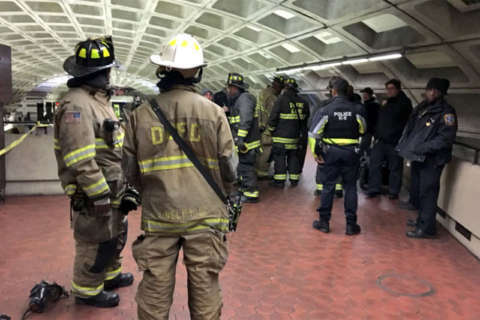