An Oct. 31 incident in which a Metro worker was shocked after coming into contact with the electrified third rail was the result of several lapses in safety procedure, an official says.
Listen now to WTOP News WTOP.com | Alexa | Google Home | WTOP App | 103.5 FM
(1/2) 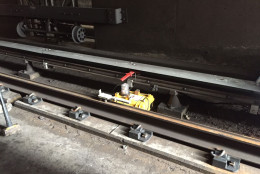 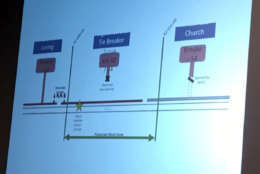 WASHINGTON — The series of events that led up to a worker being shocked by Metro’s electrified third rail is “yet another example” of failures to follow basic safety procedures, a federal expert on the Metro board of directors said.

The rail worker was released from the hospital a few days after the Oct. 31 incident after being treated for an electrical burn. A six-person maintenance crew was installing a 39-foot piece of rail between West Falls Church and Dunn Loring, but Metro Chief Safety Officer Pat Lavin said power was not properly cut off in the area.

A controller in the Rail Operations Control Center used a basic power screen in an attempt to cut power, but other maintenance work in the area, which was noted in written instructions at the console, meant additional steps were needed to keep the workers safe.

In addition, the work crew did not double check that power was off when they moved to the work area. Also, there were no additional protections, such as insulated mats protecting workers or their tools from coming into contact with the third rail.

“If there’s one frustration that we’ve all seen with Washington Metro [it’s that] there’s many, many instances of failures to follow the procedures that are put in place to protect both the public and the workers, and this is yet another example,” Lauby said.

“Policies and procedures that are put in place to protect the workers are critical, and if they’re not followed, you’re at risk and I think this is another example of that,” he added.

The worker was using a hydraulic impact wrench to tighten a bolt around 3:30 a.m. when parts of the wrench allowed electricity to flow from the third rail to the new piece of track the crew had just set into place. Only then was power properly cut off.

The use of that type of wrench has since been stopped across the system, Lavin says. The safety office has also rolled out additional rules requiring workers in the field to check the third rail power more often and to add some kind of physical barrier between workers and the third rail when there is a chance of any problems.

Metro has conducted a series of safety stand downs since the incident to emphasize rules to workers.

The agency is also adding additional warning logos to the computer screens in the Rail Operations Control Center to indicate when additional steps might be needed to cut power. Lavin expected that update in place within a few weeks.

“I believe the issue in this case was complacency,” he concluded.

New safety officer shifts are due to cover the overnight work hours more often, Lavin says. While that will begin with announced visits or full shifts with a specific work crew, he expects to shift to unannounced safety audits in about three months.