The transit authority cited Milo Yiannopoulos’s own explanations that his book is meant to stir up controversy. The writer has asked for an immediate order forcing Metro to restore the ads for 18 days.

WASHINGTON — Right-wing provocateur Milo Yiannopoulos is getting his money back for ads that Metro pulled down this summer after rider complaints, even as he tries to get them put back up across the system.

In new court filings opposing Yiannopoulos’s effort to get the book ads put back up, Metro said its advertising contractor never flagged the ads for a Metro review. Rider complaints on social media around July 4 prompted that review later, which concluded the ads violated Metro’s advertising guidelines. The ads were removed by July 8.

In Tuesday’s court filings, Metro said that it directed advertising contractor OUTFRONT to fully refund Yiannopoulos for the ads that were scheduled to run from June 26 to July 23.

The transit authority cited Yiannopoulos’s own explanations that his book is meant to stir up controversy. He refers to himself as “the most hated man on the internet.”

Publisher Simon & Schuster refused to publish the book referenced in the ad due to Yiannopoulos’s “vicious rhetoric.” He was also banned from Twitter after tweets during a racist campaign against actress Leslie Jones. He left Breitbart News after comments he made about pedophilia emerged.

Metro’s advertising restrictions were implemented in 2015 to prevent controversy and to reduce complaints, the risk of vandalism and the administrative time spent dealing with ads.

Yiannopoulos eventually wants a judge to find that the restrictions violate the First Amendment, and he has asked for an immediate order forcing Metro to restore the 45 station poster ads and 200 railcar ads for the 18 days that were remaining in the ad buy when Metro made the decision to take them down.

Metro has rejected a wide range of ads under its policy, while accepting others that restriction opponents question.

Metro’s lawyers wrote: “Rejected ads cover subjects that include: (1) anti-poaching and wildlife trafficking (from WildAid and the U.S. Fish and Wildlife Service); (2) pro-Israel and pro-Egypt (from Birthright Israel and the Egyptian Embassy, respectively); (3) pro-science (from the American Association for the Advancement of Science); (4) refugee support (from Doctors Without Borders); (5) celebrating the failure of the June 2015 Turkish coup attempt (from Musiad USA, a Turkish American association); and (6) anti-prostitution (from End Demand Illinois).”

Metro has also rejected a Human Rights Campaign ad stating, “Show your pride,” and a Parents and Friends of Ex-Gays & Gays ad that said, “Ex-gays prove change is possible.” While one questionable ad for a gay dating site was accepted, another for the same website that said “Dear Mr. President[,] let’s make America gay again” was rejected under the policy.

Yiannopoulos, backed by the American Civil Liberties Union, argues that other ads for goods or services that have been accepted are no different from the one promoting his own book.

“Ads encouraging viewers to go to a casino, have a beer, visit a dating site, or attend a comedic movie are not advocating any political or policy positions. The same is true of an ad promoting the products of defense contractors,” Metro responded.

Metro said many of those ads were never submitted to the agency for review, because the advertising contractor, on its own, is allowed to accept or reject ads that it feels clearly meet or clearly violate the system’s advertising standards.

Of the examples given, Metro said OUTFRONT decided that ads for a casino, alcohol, a play about Justice Antonin Scalia and for a movie in which women watch a male stripper clearly fell within Metro’s guidelines.

Only the gay dating website ads were submitted to Metro for review before the ads went up. 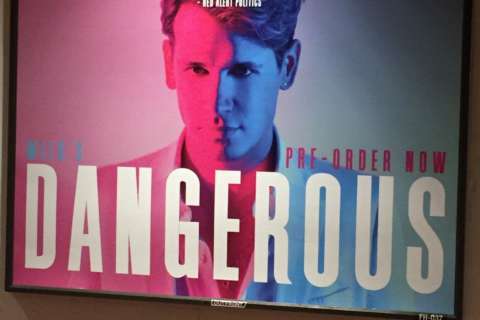