Rush hour on Metro may improve, but ‘things will pop up’

WASHINGTON — For the first time in more than a month, there is no scheduled rush-hour track work on Metro Thursday. Metro plans three more round-the-clock work zones — including surge 14, which starts Saturday.

But even after those work zones are done, there will still be more disruptions to deal with.

“There are many other things that we have to do,” he said.

The 24/7 work zones are scheduled to end in June, which Wiedefeld hopes will reduce the number of unexpected delays, especially for rush-hour riders. “There’ll be a lot less of single-tracking,” he said.

“That’ll be reduced. Still, things will pop up, but the goal is to minimize that.”

Off-hours riders should still expect single-tracking or station closures for major capital projects, such as platform, ceiling or power repairs and upgrades.

“For instance, if we want to do lighting, and we want to do the lighting on the side of a track, you have to shut down that track,” Wiedefeld said.

“We know we have a 40-year-old lighting system,” he added. “We have to replace that, so that’s a capital project. So we will still have that, but we want to minimize it obviously to weekends when we can and late night.”

Train service is scheduled to be cut back starting in July, including changes to hours every day of the week and fewer trains scheduled at rush hour. 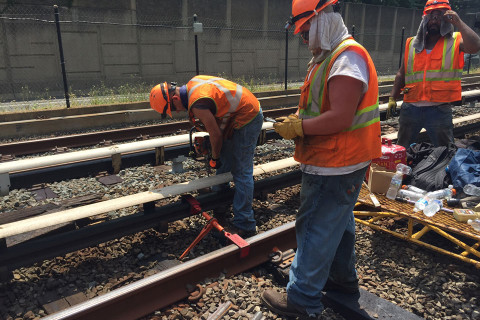 A look at Metro track work behind the scenes