Everything seemed to be conspiring against Food and Friends this Thanksgiving, making it all the harder for the nonprofit based…
Listen now to WTOP News WTOP.com | Alexa | Google Home | WTOP App | 103.5 FM
(1/5) 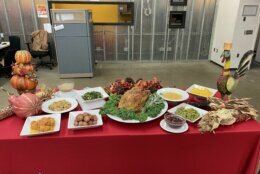 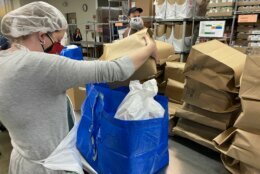 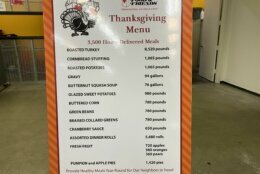 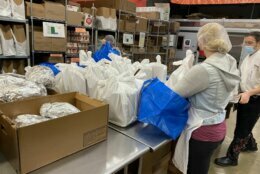 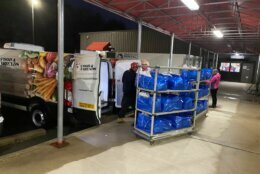 Everything seemed to be conspiring against Food and Friends this Thanksgiving, making it all the harder for the nonprofit based in Northeast D.C. to fulfill its mission.

Normally, about 500 volunteers would be cycling into what’s annually the busiest kitchen in the region on Thanksgiving. That couldn’t happen his year. And more volunteers would deliver the meals and stop to visit with the clients accepting these dinners. That definitely can’t happen this year.

But the volunteers and the staff who are on the job persevered Thursday morning with smiles on their faces.

“Today we’re going to feed about 3,500 people; a little over 700 turkeys are going out from the building today with all of the sides, with pies,” said Carrie Stoltzfus, the executive director of Food and Friends. “We want to make this Thanksgiving as joyous as we possibly can for our clients.”

That means turkeys by the hundreds, stuffing and potatoes by the pound (over 1,000 pounds of each) and gravy by the gallon (94, to be precise). And with fewer volunteers allowed inside, weeks of preparation were needed to get to this point.

“We packed as much as we could ahead,” Stoltzfus said. “We’ve been working for about the last three weeks. We froze what we could.”

Food and Friends delivers about 18 meals a week to each of thousands of people around the region who are too sick to cook for themselves.

“They are living with so many of the illnesses that we’re hearing about that make people more vulnerable to the effects of COVID,” said Stoltzfus. But the volunteer network has also been affected.

“We’ve been working with fewer people; the shifts are longer,” she added. “In all honesty, the staff has been helping out more, which has been really great. They’re tough people. They’ve been here in the kitchen and out on the road through this whole operation, and I’m really thankful for their work too.”

Normally, the early morning hours of Thanksgiving sees the kitchen filled with the sounds of aluminum foil being wrapped and plastic containers being sealed. On Thursday, everything was already wrapped, staff members and a few volunteers were focused on putting everything in bags, assembly line-style. The bags would then be put onto carts and loaded into vans headed to the nearby Fort Totten Metro Station.

The volunteer delivery drivers will meet there to pick up the meals and directions to complete a contactless delivery process.

Volunteer Alvin Chen, of the Petworth area of D.C., was among the cheerful souls inside the kitchen early in the morning. “It’s just important to give back to the community,” he said. “I see the need we have in the greater Washington, D.C. area.”

“We’ve seen a lot less of the regular volunteers who have to stay home for their own health reasons,” he added. “That’s probably been one of the biggest challenges — just the number of people who regularly would volunteer who might have to stay home.”

While he moved carts back and forth, Brenda Hamlin, of D.C., was standing at a stainless steel table, with a giant turkey hat on her head.

“I am the pie lady!” she said. She’s packing up two pies per bag for clients. “The pies just keep coming and I just keep rolling, me and my turkey hat.”

She’s already well-versed in how good they are, having bought several of them as part of the Food and Friends fundraiser this year to give to her neighbors. She snagged one for herself and it didn’t last long.

“So, so delicious,” she exclaimed.

Hamlin has been volunteering for more than a decade, keeping a promise she made to her mother.

“My mother was battling cancer, and Food and Friends was her lifeline, because she lived alone and was not able to cook for herself,” said Hamlin. “I promised my mother that when I retired I would volunteer here at Food and Friends.”

She retired 12 years ago.

“I feel like I’m helping people who have health issues, and I know when my mother received the food baskets she was just so delighted,” said Hamlin. “She was just emotionally uplifted and that was very important.”

But while the need is being met Thursday, it’ll be there again tomorrow, and the next day, and well into 2021. And more help is needed.

“The winter months, it’s a little tougher to get people anyway,” Stoltzfus said. “A lot of our volunteers are in high-risk groups themselves and they’ve had to hang back right now which is hard for them and hard for us.”

She added, “If you’re interested in helping us out, please visit our website. We’d love to have you.” 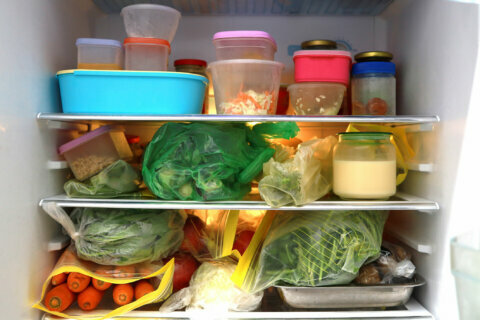