Coronavirus News: Fairfax Co. votes to increase substitute teacher pay | Is it time to get a COVID-19 booster? Which one? | Local cases of COVID-19 | How many in DC region are vaccinated?
Home » Thanksgiving News » Tips for getting through…

The Thanksgiving travel season looks to be a record-breaker, and several transportation officials gathered Tuesday to explain how to make the process as painless as possible — and the biggest mistake people make to hold everyone up.
Listen now to WTOP News WTOP.com | Alexa | Google Home | WTOP App | 103.5 FM

WASHINGTON — The Thanksgiving travel season looks to be a record-breaker, and several transportation officials gathered Tuesday to explain how to make the process as painless as possible.

At a news conference at Reagan National Airport, Sharon Pinkerton, the senior vice president of Airlines for America, said that U.S. airlines are expecting 30.6 million people to fly between Nov. 16 and Nov. 27, up from 29 million in the corresponding time period last year.

TSA Administrator David Pekoske said the most important factor in getting through security quickly is knowing what to bring on a plane. He added that you can go to the TSA website to find out what you can and can’t bring — “of course, you can bring more in your checked baggage,” he said — and that you can also post a question on Twitter to @askTSA, and get a response in about a half-hour.

Pekoske also advised passengers to give themselves extra time. “It reduces your anxiety; it reduces our anxiety. Give yourself some time to park the car, to get into the airport terminal and certainly to get through airport security. And hopefully you’ll have some time to relax before your flight.”

He added that travelers should look into signing up for one of the expedited services such as TSA Pre or Global entry, saying that although it’s too late to get enrolled for Thanksgiving, applicants should get an answer in time for the December holidays. And even though the Pre line can look pretty long, “generally it is not,” Pekoskie said — statistics show that you get through twice as fast as the regular lines.

If your travel plans will take you to Reagan National Airport, airport manager Paul Malandrino said, construction at the airport will continue through the holiday period to the first of the year. He did have some good news: Construction on the ticketing level is finished.

He warned that traffic would get very heavy at peak times, especially at curbside drop-off and pickup points, and suggested using Metro or parking in a garage, which is free for up to 60 minutes.

Malandrino added his own tip: If your flight lands after 8 p.m., get picked up on the upper (ticketing) level, where construction is finished and traffic will be lighter.

TSA staff at the airport set up a display of some of the most common items that people try to bring on board, and advice on whether you can or can’t actually do it. 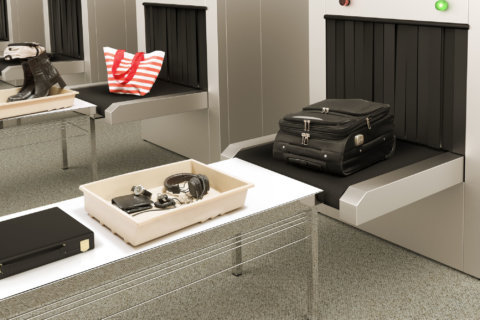