Rafael Nadal said it’s not a sure thing that he’ll be healthy enough to play Nick Kyrgios in the Wimbledon semifinals.

Nadal had abdominal pain and needed a medical timeout in the second set of his five-set victory over Taylor Fritz.

The 22-time Grand Slam champion said he would have “some more tests” on Thursday. He said he’s been experiencing pain for almost a week and that it intensified during the match.

When asked in his post-match news conference about his chances of playing Friday against Kyrgios, Nadal responded: “I don’t know. Honestly, I can’t give you a clear answer.”

Nadal was given anti-inflammatories during his medical timeout off the court. He said the trainer “just tried to relax a little bit the muscle there. But it’s difficult. Nothing can be fixed when you have a thing like this. That’s it.”

The Spaniard had battled through foot pain to win his 14th French Open title in June.

Desirae Krawczyk and Neal Skupski reached the mixed doubles final at Wimbledon with a 4-6, 7-5, 6-4 win over Sania Mirza and Mate Pavic on No. 2 Court.

They will face Australian duo Sam Stosur and Matthew Ebden in the final.

Krawczyk is American and Skupski is British.

Rafael Nadal advanced to the Wimbledon semifinals after winning a fifth-set tiebreaker against Taylor Fritz of the United States.

The victory keeps alive Nadal’s chances for a calendar-year Grand Slam. The 36-year-old Spaniard will next play Nick Kyrgios for a place in Sunday’s final.

The 22-time Grand Slam champion had left the court with a trainer for a medical timeout in the second set but returned and played on.

The second-seeded Nadal improved to 8-0 in quarterfinal matches at the All England Club.

Rod Laver in 1969 was the last man to win all four major tournaments in the same calendar year.

Coco Gauff and Jack Sock have been eliminated from the mixed doubles tournament at Wimbledon.

The American pair lost to Australian duo Sam Stosur and Matthew Ebden in the semifinals 6-3, 5-7, 7-5 on No. 3 Court.

Both Gauff and Sock reached the third round in the singles tournaments.

Stosur and Ebden will face either Sania Mirza and Mate Pavic or Desirae Krawczyk and Neal Skupski in the final.

Nick Kyrgios advanced to the semifinals at a Grand Slam tournament for the first time by beating Cristian Garin 6-4, 6-3, 7-6 (5) on Centre Court at Wimbledon.

Kyrgios reached the quarterfinals at the All England Club when he made his debut at the grass-court major in 2014 but this year was his first time getting back to that stage.

The Australian is the lowest ranked and first unseeded men’s semifinalist since 2008. He is currently ranked 40th.

Kyrgios will face either two-time champion Rafael Nadal or Taylor Fritz in the semifinals on Friday.

Elena Rybakina became the first woman from Kazakhstan to reach the semifinals at a Grand Slam tournament by beating Ajla Tomljanovic 4-6, 6-2, 6-3 at Wimbledon.

The 17th-seeded Rybakina dropped her first set of the grass-court tournament but broke her Australian opponent early in the second and third sets.

Rybakina hit 15 aces against Tomljanovic on No. 1 Court and will next face 2019 Wimbledon champion Simona Halep for a spot in the final.

Simona Halep advanced to the Wimbledon semifinals with a 6-2, 6-4 win over 20-year-old Amanda Anisimova, the last American in the draw.

The 2019 Wimbledon champion extended her winning streak at the All England Club to 12 matches.

The 16th-seeded Halep hasn’t dropped a set en route to the final four.

She will next face either 17th-seeded Elena Rybakina or unseeded Ajla Tomljanovic for a place in the final.

The 30-year-old Romanian wasn’t able to defend her 2019 title last year — after the 2020 edition was canceled — because of a calf injury.

Two former champions will be on Centre Court in the Wimbledon quarterfinals.

Simona Halep, the 2019 champion at the All England Club, will be up first against Amanda Anisimova. Two-time champion Rafael Nadal will follow against Taylor Fritz.

Both Anisimova and Fritz are Americans and will be trying to reach the Wimbledon semifinals for the first time.

On No. 1 Court, Ajla Tomljanovic will face 17th-seeded Elena Rybakina before Nick Kyrgios takes on Cristian Garin in the later match. 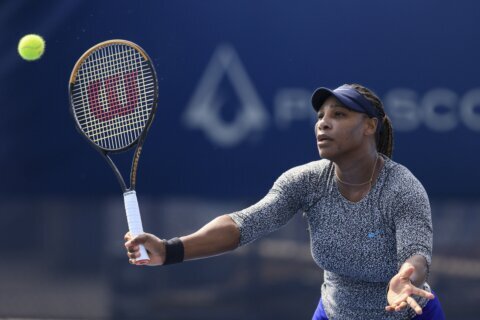