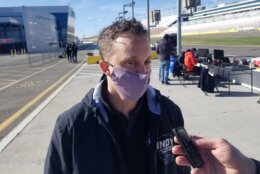 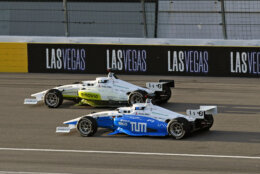 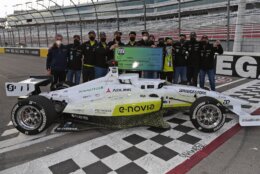 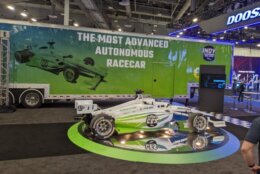 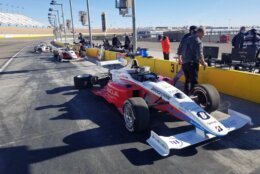 Automotive technology has grown so much over recent years that the CES auto event at the Las Vegas Convention Center’s West Hall has become recognized as one of the largest auto shows in the world.

At a recently concluded celebration of technological innovation, attendees witnessed the  introduction of visionary new features, such as the color-changing BMW iX Flow, Cadillac’s InnerSpace automotive theater (for when self-driving cars become a reality), LG’s Omnipod “office in a car” and more.

But while these marvels drew the attention and wonder of those in attendance, the most exciting automotive-based activity took place 15 miles north of the Strip at the Las Vegas Motor Speedway.

Staged on Friday, Jan. 7, the Indy Autonomous Challenge (IAC) was a spirited race between university students who had programmed full-sized autonomous open-wheel race cars. Competing teams arrived in Vegas last weekend and, following a full week of practice at the racetrack, went head-to-head to decide a champion, who would pocket the contest’s top prize of $150,000.

The IAC competition consisted of nine teams from 19 universities in eight nations. Six of those teams worked across international borders to complete their design.

Each of the nine race teams received an identical vehicle — an IAC Dallara AV-21 — the most technologically advanced, fastest autonomous race car ever assembled.

“There is no hardware advantage,” said University of Virginia Computer Science Professor Madhur Behl, who also served as principal for the Cavalier Autonomous Racing Team.

“Each car has the same engine, the same tires, the same sensors. The only way you can beat another team is by having better software,” Behl said.

While PoliMOVE, a hybrid team of students from Italy’s Politecnico di Milano and the University of Alabama, took top competition honors, the broad winner may be the future of autonomous driving.

“The focus of this competition is to develop — alongside all the other teams — the algorithms and research designed to push the limits for autonomous driving,” said Phillip Karle, team leader from TUM Autonomous Motorsport, a collection of 15 Ph.D. students from the Institute of Automotive Technology in Munich, Germany.

Karle said his team was, “supported by the university, but also by partners from within the industry.”

Karle also acknowledged “graduate students, undergraduate students and our team members, all of whom worked together to develop the software necessary to drive the vehicles.”

While individuals attending Friday’s event may have expected to see nine cars on the racetrack, what they actually witnessed were two cars racing head-to-head, attempting to pass and maneuver, trying to finish first around the track so they could advance to the next round.

But if you were expecting a team of students operating their vehicles through a radio-controlled interface, think again.

The moment these vehicles hit the track, they were entirely on their own — fully autonomous — which means the race cars made their own AI-based decisions on when to speed up, when to slow down, when to maneuver and when to pass.

“This is truly a passing competition where we have two cars on the track at the same time, passing one another at increasingly higher and higher speeds,” said Paul Mitchell, president and CEO of Energy Systems Network, the company that produced the IAC.

This is important, Mitchell said, because high-speed autonomous vehicles, running different algorithms, have never engaged one another and make decisions the way human drivers do.

“It’s absolutely critical that we advance high-speed automation because, if we’re ever going to have truly autonomous vehicles encountering one another on the highway at 70, 80 miles an hour, we need to know that this can be done safely,” Mitchell said.

“To address this concern, we created this prize competition that would attract the best and brightest minds to work on high-speed automation.”

According to Mitchell, the Las Vegas Indy Autonomous Challenge was the culmination of a three-year journey. The idea was built upon the impact of the DARPA Grand Challenge in 2004 and 2005, which essentially launched what now the autonomous vehicle industry.

“We saw that, while industry was advancing the state-of-the-art in low-speed automation on urban and suburban settings, there really wasn’t enough work being done at high-speed automation,” Mitchell said. “And that’s what the IAC is all about.”

The IAC program is also all about building up the industry.

As part of the week’s activities, Karle’s TUM Autonomous Motorsport — the competition runner-up to PoliMOVE — announced the launch of a new Autonomy Platform company called Driveblocks, which plans to offer a modular, scalable, robust and safe platform for fully autonomous vehicles.

Driveblocks initially plans to target the commercial vehicle sector and offer a complete solution to fleet automation. They hope to serve customers in many areas, including mining, agriculture, warehouse logistics and more.

“The whole idea here is to push the frontiers of robotics and artificial intelligence and autonomous vehicles. We do so by demonstrating how stable our cars are, that they can really go safely at 150 mph,” said Behl.

UVA has been part of the IAC competition since 2019, when the team ran a historic race held at Indianapolis Motor Speedway.

Echoing Karle’s comments, Behl says it’s not all about winning.

“If your car is stable and can effectively navigate around another car at more than 100 miles-per-hour, then there’s a chance that some of this technology will eventually get transferred to regular self-driving cars and improve their overall safety as well.”

Steve Winter and Kenny Fried are WTOP contributors who work for Brotman | Winter | Fried, a division of Sage Communications.