HOUSTON (AP) — Tony Finau wants to end his big year in a big way, and he took a step Thursday by biding his time and delivering late birdies for a 5-under 65 that gave him a share of the lead in the Houston Open.

Finau used a 60-foot birdie putt on the par-3 second hole, his 11th of the round, to start a stretch of four birdies in five holes.

He was tied for the lead with bogey-free Aaron Wise and Alex Noren of Sweden, who could use a big week in Houston to nail down a spot in the top 50 in the world as he tries to get a Masters invitation.

Tyson Alexander also was at 5-under and drove into the left rough when the first round was suspended because of darkness. Alexander chose not to finish his round and will finish the 18th on Friday morning before starting his second round.

The large group at 66 included Sanderson Farms winner Mackenzie Hughes of Canada and Keith Mitchell, who was poised to take the lead until his second shot into the par-5 16th went into the water and led to bogey.

Finau won consecutive starts this summer in Minnesota and Detroit for his first season of multiple wins. He missed the cut last week in Mayakoba and wasn’t faring too well at Memorial Park, except that he knew the course was demanding from tee-to-green.

“I knew the golf course — it’s a tough golf course to play,” Finau said. “You have to drive it in the fairway and your work’s not done. It’s hard to hit the greens. You know if you miss the green, it’s hard to get up-and-down, so I was just patient with myself.

“I made a couple bombs, I think that kind of opened it up.”

The biggest one was on No. 2, and with a breeze at his back, he had no trouble adding another birdie on the par-5 third. He hit a wedge to 4 feet on No. 5 and then holed a birdie putt from 12 feet on the next hole.

Finau also finished with a bang, rolling in a 35-foot putt on the par-3 ninth.

His big summer has Finau at No. 15 in the world ranking, courtesy of his big run through late July and early August. The tour has two tournaments left this year before resuming the season at Kapalua the first week of January.

“The season that I’ve had this past season was very nice, but I want to go out in a good way and I want to finish the year strong,” Finau said. “And I think that’s what I’m looking for this week.”

The top 50 in the world at the end of the year typically get Masters invitation, and Noren put himself into the mix with a runner-up finish in the Dunhill Links in Scotland. He came into the Houston Open at No. 50 and knew he had his work cut out for him.

Noren tied for 42nd last week at Mayakoba on a tight course cut through the mangroves that requires more precision than power and a superb wedge game. Memorial Park has a lot more beef, and Noren wasn’t sure what to expect out of his game.

“Last week was like medium to short course, a lot of wedges that you have to get close. Here is longer, you’ve got to hit fairways and you’ve got to hit greens,” Noren said. “So I was a little bit nervous coming into today. Didn’t feel great in practice, but found something and got the irons a lot better. Overall, I would have taken 65.”

Wise ran off four straight birdies on the front nine and played bogey-free. His only win on the PGA Tour so far was the AT&T Byron Nelson in the Dallas area. Is another title in Texas in the cards?

Memorial Park had plenty of bite. Masters champion Scottie Scheffler was 4 over through 10 holes in the morning when he salvaged a solid round with four birdies coming in for a 70. Scheffler can regain the No. 1 world ranking with a win.

Sam Burns wasn’t so fortunate. He had eight bogeys and seven pars until making his first birdie on the par-5 16th and finishing with a 77. 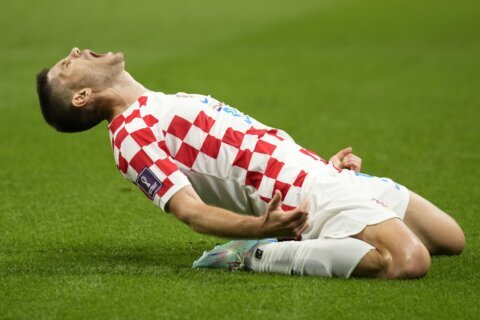