SUNRISE, Fla. (AP) — Ryan Lomberg scored early in the third period and the Florida Panthers held on to beat the New York Islanders 3-2 on Sunday.

Anton Lundell and Eetu Luostarinen also scored for the Panthers, and Spencer Knight finished with 23 saves. Florida beat New York for the second time this season after a 3-1 win in the season opener on Oct. 13.

Florida opened a 2-0 lead within the first 9 1/2 minutes with unassisted goals from Lundell and Luostarinen.

Lundell got the Panthers on the scoreboard when he beat Islanders defenseman Adam Pelech to the puck near the backboards, turned and scored on a sharp-angled shot that trickled past Varlamov just 39 seconds into the game. Luostarinen made it 2-0 at 9:13.

“Those are tough games against the Islanders,” Florida coach Paul Maurice said. “They were a tired team and a veteran team so you knew you had to jump on them early and hope something broke loose. We did a pretty good job with that. After the first period, you knew it would be a different looking game, a grinding game.”

Lee got the Islanders within one at 4:27 of the second when he swept in the rebound of a shot by Mathew Barzal that Knight stopped but the puck got behind him.

Lomberg’s slap shot from the left circle at 2:56 of the third restored Florida’s two-goal lead.

“I was joking with someone that ‘hey, someone had to do it’,’’ Lomberg said. “One of us was going to score there and it was huge for us. It was one of those things where we knew if we kept playing the right way, good things were coming. I am glad I could be that guy tonight.”

On a two-man advantage midway through the third, Lee again cleaned up a loose puck behind Knight to pull the Islanders within a goal at 9:07.

“We have urgency every day,’’ said Islanders coach Lane Lambert, whose team has started out 2-4-0. “There is no concern that the right pieces are here. It’s just a question of generating chemistry and if things are not going the way we want, we’ll have to move some guys around. They understand that.”

The Islanders played the most back-to-back games of any team in the NHL last season with 17. Sunday was their first such contest of the new season and they went 0-2 after a 5-3 loss at Tampa Bay on Saturday night.

The Islanders have not allowed a power-play goal through their first six games of the season, going 22 for 22 on the penalty kill. On Sunday, the Panthers went 0 for 4 with the man advantage. The Islanders’ had the fourth-best penalty kill by percentage (84.2) last season. The Florida power play is currently ranked near the bottom of the league, now 2 for 27 through its first six games.

Panthers: At Chicago on Tuesday night. 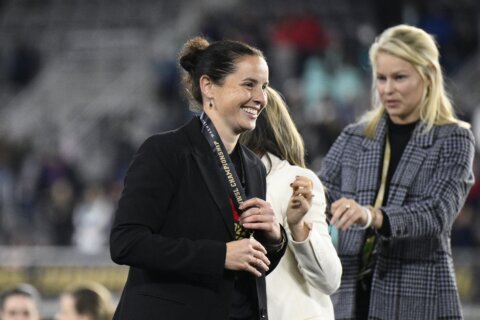