The No. 5 national seed Aggies (44-19) will play Oklahoma in the Bracket 1 final. They need to beat the Sooners on Wednesday and again Thursday to reach the CWS finals this weekend.

“This time last year we didn’t even have a coaching staff,” first-year coach Jim Schlossnagle said. “A third of this team wasn’t even a Texas A&M Aggie yet. We were still recruiting out of the transfer portal. You look up a year later and you’re playing in the final four of college baseball.”

“Well, if there’s a place you want to end it, it’s obviously here,” Notre Dame coach Link Jarrett said. “How we ended it was tough. That hurts. That wasn’t indicative of how our team plays.”

Dettmer (6-3) was working on three days’ rest after giving up seven runs and getting pulled in the second inning of Texas A&M’s 13-8 loss to Oklahoma on Friday.

“I’m not going to lie to you. After Friday, I felt just terrible, like I let my team down,” Dettmer said. “But to come back and have Coach give me the ball just two games later, all that confidence just flowed through me and to know they trust me … all I had to do was believe in myself. That’s what happened and had some success today.”

He bounced back with his best performance of the season. He got Notre Dame batters to swing over the top of his sinker and induced 10 groundouts.

The Irish reached base on an error and hit batter but didn’t get their first hit until David LaManna singled with one out in the fourth.

Dettmer, who struck out six and walked none, had his longest outing since he went seven innings against Vanderbilt on April 28. He threw 99 pitches, 68 for strikes.

“His pitches had depth,” Notre Dame’s Brooks Coetzee said. “He had the sinker going. He had the fastball’s run going. Had the changeup going. Nothing was going straight, and he was pitching everybody differently. He didn’t fall into tendencies.”

The Aggies converted two walks, a balk, two singles and a throwing error into three runs in the third, the first two off starter Liam Simon (2-1).

Werner homered leading off the fifth against Jack Findlay and Dylan Rock later had an RBI single, ending his 0-for-14 spell and making it 5-0.

Findlay, the Irish’s star freshman left-hander, had allowed only one earned run over his 14 1/3 innings in the NCAA Tournament before giving up the two in the fifth.

Brad Rudis took over for Dettmer starting the eighth inning, and Coetzee drove Rudis’ second pitch more than 400 feet over the left-field fence for his 12th homer.

After Rudis walked the next batter, the Aggies brought in lefty Joseph Menefee, who allowed one hit in two innings for his second save.

The game was the ninth of the CWS, and all were decided by four or more runs. That was a first in the event’s 75-year history. 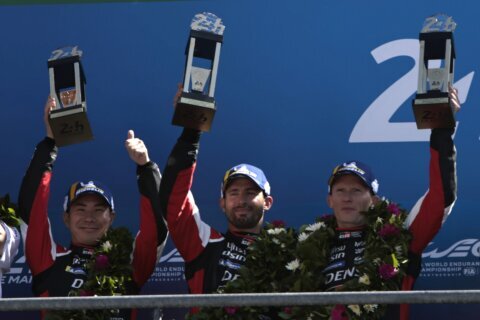 Kobayashi to sub for Hawksworth with Lexus in Canada