MADRID (AP) — Luis Suárez needed a little more than 10 minutes to make up for his slow start to the season.

Suárez scored two late goals to give Atlético Madrid a 2-1 win at Getafe in the Spanish league on Tuesday, ending the team’s two-match winless streak and extending a decade-long unbeaten run against its Madrid rival.

After scoring only once in his first six matches this season, Suárez got the equalizer in the 78th minute and the winner in the 90th to boost Atlético after two 0-0 draws.

“A comeback win like this, with the team trailing late, will help boost the team’s morale,” Suárez said. “We know we have to fix a few things. We have to keep improving.”

It was the 20th straight match without a loss against Getafe, which hadn’t scored since its last victory against Atlético in 2011.

Getafe played with 10 men from the 74th because of a red card shown to midfielder Carles Aleñá. It had opened the scoring with a header by Stefan Mitrovic late in the first half for his first goal since joining the club this season.

The victory moved Atlético back to the top of the league with 14 points, one more than Real Madrid which hosts promoted Mallorca on Wednesday.

The defending champions were coming off consecutive scoreless draws at home against Porto in the Champions League and against Athletic Bilbao in the Spanish league.

Second-to-last Getafe remained one of the two teams yet to earn points in the league this season, along with Alavés.

“It’s frustrating to leave without any reward after we played a great match,” Getafe defender Jorge Cuenca said.

The hosts allowed Atlético to take full control of the match after Aleñá was sent off for a foul from behind on Atlético forward Matheus Cunha.

After missing a few good chances and hitting the crossbar, Suárez evened the match four minutes after the red card for Aleñá with a left-footed shot from inside the area. He netted the winner with a close-range header for his third goal of the season. The Uruguay striker, who joined from Barcelona, was Atlético’s top scorer in its title-winning campaign last season.

Antoine Griezmann started for Atlético after being on the bench against Porto last week. He was replaced by Cunha in the 67th after another lackluster performance.

Atlético was without Portugal forward João Félix. He was handed a two-match suspension after earning a red card — a yellow for a foul and a red for then complaining to the referee — in the draw against Bilbao on Saturday.

Newly signed forward Radamel Falcao scored his second goal of the season with a header in the sixth minute of stoppage time to give Rayo Vallecano a 2-1 win at Athletic Bilbao.

Falcao had scored his first goal after coming off the bench in his debut with Rayo last Saturday.

The 35-year-old Colombia veteran signed with Rayo as a free agent.

Celta Vigo won 2-0 at Levante for its first victory of the season with goals from Iago Aspas in the 66th and Brais Méndez in the 85th. 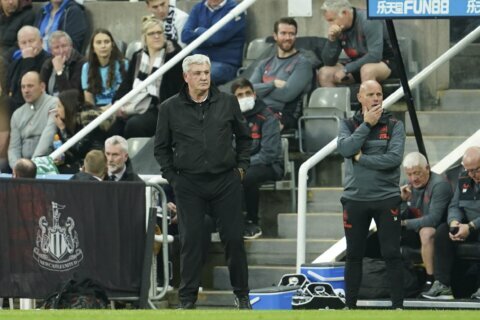