McIlroy misses cut after spectator swings his 6-iron on tee

NORTH BERWICK, Scotland (AP) — Rory McIlroy was waiting to get his second round underway on the 10th hole at the Scottish Open when a spectator wandered on to the tee, had a dig into the four-time major winner’s golf bag, and started taking swings with his 6-iron.

It wasn’t long before the interloper, who smelled of alcohol according to McIlroy’s playing partner, Jon Rahm, was ejected from the tournament.

After an even-par round of 71, McIlroy missed the cut at the European Tour event on Friday and will be making an earlier-than-planned journey to the south of England for next week’s British Open.

He was 1 under for the tournament, 10 shots off the lead held by the top-ranked Rahm and Belgium’s Thomas Detry — after their rounds of 6-under 65 — and first-round leader Jack Senior (67). They were all on 11-under 131 overall.

McIlroy was reluctant to speak in detail about the incident on his first hole, which took place about 8 a.m. local time.

“I was surprised,” he said

“It was handled efficiently and everything was OK. I had no idea who it was.”

Rahm said alcohol could be smelled on the spectator’s breath.

“He came in so confident and we thought he was going to take a picture or something,” the U.S. Open champion said. “We thought he was maybe part of the camera crew or a photographer.

“After a little bit, when he walked back and they were taking him out, you could smell the reason why it happened. Me and Rory didn’t say anything. He was holding a 6-iron and I didn’t want to get hurt.”

“It didn’t put anyone off,” the Spanish player said. “If anything, it put a smile on our faces. It will be a pretty good story to tell in the future.”

Footage of the incident was spread widely on social media. The man was eventually escorted off the tee by a security guard after handing the club to McIlroy’s caddie, Harry Diamond.

David Wilson, a member of nearby club Kilspindie who posted the footage, said in The Scotsman newspaper: “The players laughed it off, saying they knew he wasn’t a golfer when they saw his grip.”

The European Tour said the matter was being dealt with by Police Scotland, which told Britain’s Press Association that the man had been taken to the hospital in Edinburgh and that “enquiries are ongoing.”

This week marks the first time that spectators have been allowed in to watch a British golf event since the start of the coronavirus pandemic. Around 4,000 were being permitted entry per day.

They didn’t help McIlroy, who was seventh in the U.S. Open at Torrey Pines last month but was tied for only 59th in the Irish Open last week.

Rahm has retained the form that led him to his first major title, adding a 65 to his opening 66.

He reached the turn in 29 shots — and was 6 under for his round at that stage — and added a seventh birdie of the day at No. 1.

Rahm could cover the front nine only in even par.

“The elements changed and I was playing some holes in a wind I had never played before. I got a little hesitant,” Rahm said.

“I made some aggressive swings without thinking about it as much as I could have because I was playing so well and maybe could have taken a step back. Swing-wise, it’s good. If I just clean up some little mistakes, it could be better.”

George Coetzee (66), Lee Westwood and Matt Fitzpatrick (66) were a stroke behind Rahm, Detry and Senior.

No.3-ranked Justin Thomas was a further shot back after a 69. 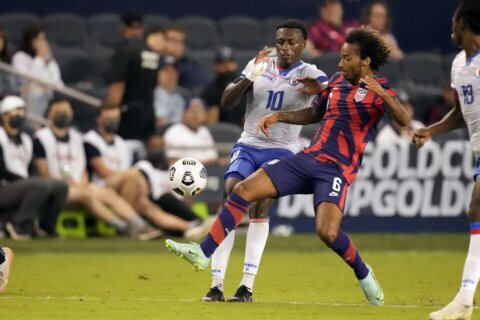