Union’s visit came at the wrong time for the European champion, weakened by injuries and focused on the second leg of the quarterfinals in the Champions League. Bayern lost the first leg 3-2 to Paris Saint-Germain on Wednesday.

Bayern struggled to break through Union’s stubborn defense until the 18-year-old Jamal Musiala finally made the breakthrough in the 68th minute, but Robert Andrich set up Ingvartsen for the visitors’ equalizer in the 85th.

Bremen made a good start until Dani Olmo broke the deadlock in the 23rd. Alexander Sörloth grabbed two more for Leipzig before the break, and Marcel Sabitzer made sure of the win after Milot Rashica pulled one back with a penalty.

Bayern coach Hansi Flick, who said Friday his squad wasn’t as strong as the previous year’s, started with reserve players Josip Stanisic and Tiago Dantas. It was a debut for the 21-year-old Stanisic, a defender, and first start for Dantas.

Right back Bouna Sarr made a rare start as Flick changed the entire back line from Wednesday’s loss to PSG, while Eric Maxim Choupo-Moting again filled in for the injured Robert Lewandowski.

Bayern’s injury worries deepened after about half an hour when Kingsley Coman needed treatment on his left knee, but the France attacker continued till the break, when he was substituted by Leroy Sané.

The 18-year-old Christopher Scott came on for his Bayern debut in the 66th, and Musiala scored two minutes later. Union’s defense failed to clear the ball, which rebounded off Thomas Müller’s shoulder into Musiala’s path. He danced past a couple of defenders before scoring from close range.

“A point at Bayern is a great result, we have to be pleased,” said Union coach Urs Fischer, whose team drew 1-1 with Bayern in the reverse fixture in December.

Fourth-place Eintracht Frankfurt enjoyed a 4-3 win over third-place Wolfsburg, and there was another thriller in the late game, when Ansgar Knauff’s first Bundesliga goal gave Borussia Dortmund a 3-2 win at Stuttgart.

“It’s been an unbelievable week for me,” said the 19-year-old Knauff, who made his first start for Dortmund against Manchester City on Tuesday.

Dortmund fell behind to a 17th-minute header from Saša Kalajdžić — reportedly a target in case Erling Haaland leaves the club — and then went ahead early in the second half through goals from Jude Bellingham and Marco Reus.

Daniel Didavi equalized on a counterattack in the 78th, but Knauff had the final say in his third Bundesliga appearance despite facing four Stuttgart defenders when he drilled his shot inside the right post.

Hertha Berlin could only draw 2-2 with Borussia Mönchengladbach despite playing most of the game with a player advantage after goalkeeper Yann Sommer’s early sending off for the visitors.

Sommer took down Jhon Córdoba when the Hertha forward would have been through on goal.

Boosted by the extra player, Hertha pressured for an opener that duly came in the 23th with Santiago Ascacibar firing in a dipping shot from outside the penalty area.

But Alassane Plea equalized four minutes later with a cool finish inside the far post after Hertha captain Niklas Stark was unable to cut out Marcus Thuram’s throughball. Stark then conceded a penalty for a late challenge on Thuram and Lars Stindl fired the visitors ahead from the spot.

Córdoba equalized early in the second half but Hertha couldn’t find any more goals.

“The ball didn’t want to go in in the end. It’s bitter, a pity, but we have to live with it,” said Stark, whose team remains just a point above the relegation zone. 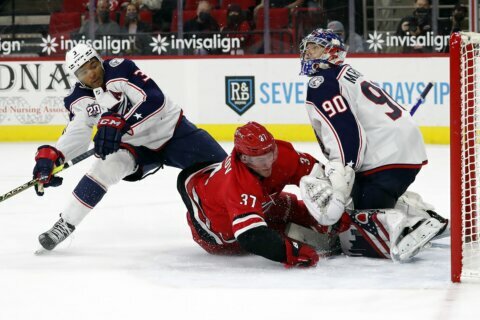 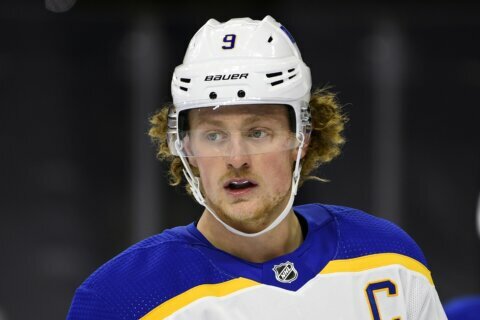 Eichel refers to `disconnect’ with Sabres on treating injury