BARCELONA, Spain (AP) — With Jules Koundé defending one area and scoring goals in the other, Sevilla is on course to fight for more titles this season.

Koundé showed why he is one of the hottest young talents in Europe on Wednesday when the center back displayed the skills of a forward to help beat Barcelona 2-0 in the Copa del Rey.

It was the third goal of a breakout season for the 22-year-old defender who has helped Sevilla maintain a strong campaign in three competitions.

Sevilla hosts Huesca in the Spanish league on Saturday seeking a ninth consecutive win overall. The team coached by Julen Lopetegui is in fourth place and in the thick of the chase along with Real Madrid and Barcelona of front-runner Atlético Madrid.

“The key competition for us is La Liga, it is the true test and we are already thinking about Huesca and maintaining our good run,” Koundé said after the win over Barcelona.

Koundé is the latest discovery by Monchi, Sevilla’s sports director known for finding unknown talents like Dani Alves and Julio Baptista, buying them cheaply, and then after they excel at Sevilla, selling them for a handsome profit.

Lopetegui immediately put Koundé into his starting lineup on his arrival, and the team enjoyed a successful season that culminated with a Europa League title and a fourth-place finish in Spain that was worth a Champions League berth.

This season, Sevilla has progressed in Europe’s elite club competition and is set to host Borussia Dortmund in the first leg of the round of 16 next week.

Since his arrival in Seville, Koundé has clicked with fellow center back Diego Carlos and holding midfielder Fernando Reges, with the trio forming an intimidating defense. Sevilla has not conceded a goal in all six cup matches this season, and only Atlético (12) has allowed fewer goals than Sevilla (16) in the league.

Koundé is also sure with his passing, and as Barcelona found out, a threat in attack.

Surging forward from Sevilla’s backline, the French defender first dodged Antoine Griezmann’s sliding tackle. He then slid past Sergio Busquets — with Fernando wisely not interrupting his teammate’s dribble — before using a deft change of foot to ditch Samuel Umtiti. Lastly, he showed his marksmanship by beating Marc-Andre ter Stegen with a right-footed shot the German goalkeeper touched but could not keep out.

“The ball almost got away from me at the beginning, but Fernando let me recover it, I made my move and it ended well,” Koundé said. “I like to practice that strike before matches and today it went in.”

Koundé had already come close to scoring with a similar strike in the match that Sevilla dominated by shutting down Lionel Messi and the rest of Barcelona’s attack.

Ivan Rakitic, who rejoined Sevilla from Barcelona this season, scored the second goal against his former team to give Sevilla a big lead ahead of the return leg at Camp Nou on March 3.

“I don’t think even he expected to score,” Rakitic told Copa radio about Koundé’s goal. “He just blew past one guy, then another … it is a talent he has. He can advance the ball and break down opponents, which is rare in a central defender.”

Atlético will aim to bounce back from a 2-2 draw with Celta Vigo that ended an eight-match winning streak in the league.

Atlético leads the league with 51 points from 20 games played. Real Madrid is second with 46 points from 22, followed by Barcelona with 43 and Sevilla 42 from 21 games each. 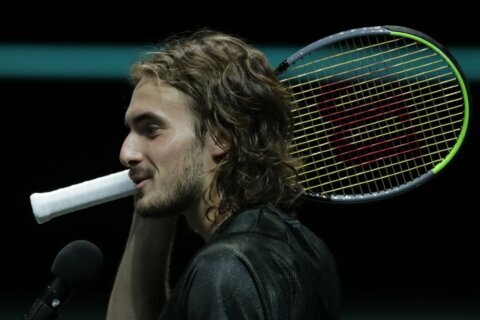 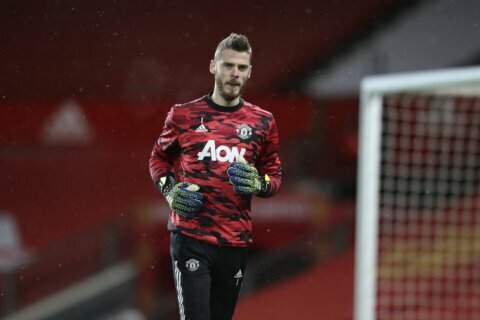