They sweat like athletes, but they have much longer careers. Sporting mascots have their own Hall of Fame, and a local icon has made it in.
Listen now to WTOP News WTOP.com | Alexa | Google Home | WTOP App | 103.5 FM
Sometimes what they do will make your eyes pop out — and that’s before their heads come off.

When mascots at sporting events finally take a break and take their heads off, they sweat like the athletes they cheer for — maybe even more. Mascots are amazing athletes and performers: Often wearing oversized and very hot costumes, they combine a sense of humor with a sense of timing as they try to add to the experience without taking away from the competition.

It’s worthy of recognition, and just 30 minutes south of downtown Chicago, there is a place that does just that. The National Mascot Hall of Fame, on the south shore of Lake Michigan in Whiting, Indiana, has 25,000 square feet on three floors of interactive exhibits to honor the iconic characters who count their victories in smiles.

“I’ve been working on this project going on seven years, and as I tell people, I haven’t met a mascot that I haven’t personally fallen in love with,” said Al Spajer, the director of community engagement for the Mascot Hall of Fame. “They are such engaging characters. They’re terrific with kids, with students, with families, and with disabled people.”

The original Phillie Phanatic, David Raymond, came up with the idea for a place to honor his fellow mascots. What started online in 2005 became a physical reality when Whiting stepped to the plate to help provide a home for the Mascot Hall of Fame.

And it is not easy to get into the Hall – more than 100,000 ballots are cast in the selection process. 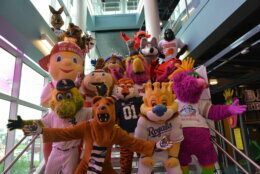 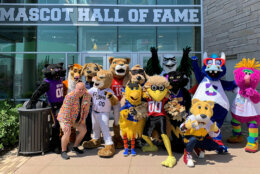 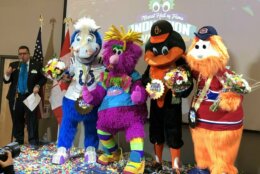 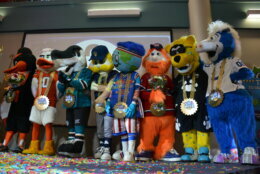 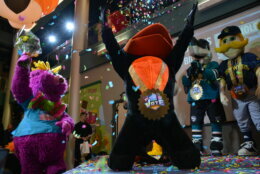 Last year, 19 characters were named as finalists for the hall, and last December at the MHOF’s 2nd Annual Fur Tie Fundraiser (yes, fur tie), the Class of 2020 was announced. At a recent virtual induction ceremony, The Oriole Bird (MLB’s Baltimore Orioles), Youppi! (the NHL’s Montreal Canadiens), Boomer (the NBA’s Indiana Pacers) and Blue (the NFL’s Indianapolis Colts) were added to the Hall.

The induction ceremony might have been online, but the fun was real. Since mascots, as a rule, don’t talk, there was no concern about long speeches. Still, the 20-minute program included confetti cannons, lots of pantomime from the honored characters and talking presenters, including former Orioles pitcher Ben McDonald for the Oriole Bird.

The Bird was hatched out of a giant egg before the team’s 1979 season opener at Memorial Stadium. That was the same year “Orioles Magic” started – the team, led by manager Earl Weaver, had a dramatic way of winning close games, often with walk-off homers, and made it all the way to the World Series.

There was also a loose Nationals connection to this year’s class of the Mascot Hall of Fame. Kirk Muller, who helped the Canadiens win the Stanley Cup in 1993, was the presenter for the mascot Youppi!.

But Youppi! got his start in 1979 with the Montreal Expos, who moved to Washington in 2005.

“I was on a sports radio talk show in Montreal and how Youppi! would enter the Mascot Hall of Fame was debated,” said Spajer. “They were serious, and there was real concern about how the Expos fans would feel about Youppi! going into the Hall as a Montreal Canadien.”

What is not up for debate is that mascots have added so much to the experience of attending collegiate and professional games. Each team or school works hard to develop a character that represents them well, and the mascots do the hard work that they love so much – becoming stars without stealing the show.

“It’s a consistently wild story as to how people react to them,” said Spajer. “There is the ridiculous fun, and you see some of the chances that they take in terms of doing somersaults or the splits or coming downstairs. And I’m always thinking, ‘I hope this goes OK,’ but somehow the performers pull that off and they are so wonderfully entertaining.”

The Mascot Hall of Fame’s goal is to entertain, educate and enthuse, and Spajer said that when people leave after a visit, they often say “Wow; I didn’t expect that.”

That makes sense, because mascots are always trying to deliver the unexpected.