The Fredericksburg Nationals will hold a virtual opening day on Thursday, which was supposed to be their first day in their new home.
Listen now to WTOP News WTOP.com | Alexa | Google Home | WTOP App | 103.5 FM

Peanuts and Cracker Jack are still OK, but taking me out to the ballgame is not possible right now. Instead, the Fredericksburg Nationals will hold a Virtual Opening Day on Thursday, which was supposed to be their first day in their new home.

The FredNats are the Class A minor-league affiliate of the Washington Nationals. The team moved in the offseason to Fredericksburg, Virginia, after spending several years in Northern Virginia, most recently in Woodbridge as the Potomac Nationals.

“We had decades of wonderful baseball in Prince William County,” said Seth Silber, one of the owners of the Fredericksburg Nationals. “We had an opportunity to move to Fredericksburg and we are finishing an absolutely incredible stadium where everyone is going to love to see the future Nationals.”

The Fredericksburg Nationals’ Facebook page will be the venue for the team’s Virtual Opening Day. The festivities will begin at 9 a.m. and every hour on social media the FredNats promise nine innings of games, giveaways, interviews with coaches, and more.

Fans will also be taken on a video tour of the new stadium. Signature features of the FredNats’ new home include a standing area on top of a 15-foot wall in the right-field corner, where fans will be able to watch the game from a drink rail, and seats in front of a manual scoreboard that fans will be asked to update.

The virtual opening day will culminate with a first pitch ceremony at 5:30 p.m. at the ballpark, complete with singing of the national anthem and the shouting of “Play ball!”

Fredericksburg Mayor Mary Katherine Greenlaw and City Councilmember Matt Kelly, who were instrumental in attracting the team to their city, will be part of the first-pitch ceremony. The pitch will be thrown on the field by Mary Washington Healthcare’s chief medical officer, Dr. Christopher Newman, and chief nursing officer Eileen Dohmann.

“Having the folks from Mary Washington Healthcare involved in the first pitch is our way of saying ‘thank you’ to the medical workers,” Silber said. “It’s a bit bittersweet: We are excited to host everybody for a real game, but right now we hope we can lift up the community a little bit and emphasize what is important right now — the people who are taking care of us right now.” 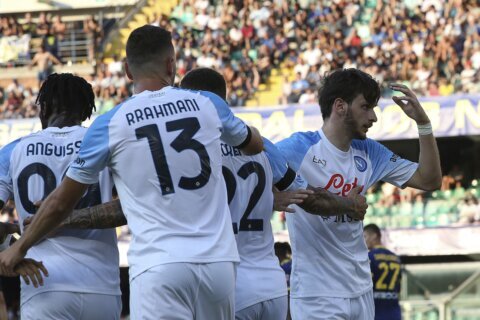 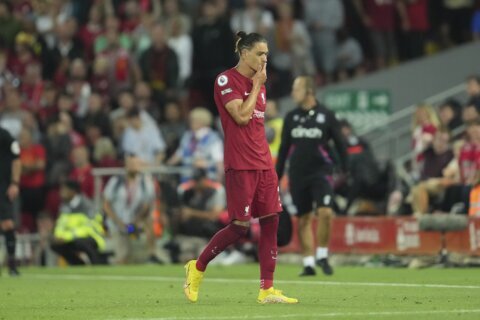 Morata scores twice as Atlético debuts with win at Getafe