Not just for snobs: DC club wants to bring squash to the masses

Squash has traditionally been a game confined to country clubs and the Ivy League, but a new facility in D.C. — and a couple major tournaments being hosted there — is hoping to change that.
Listen now to WTOP News WTOP.com | Alexa | Google Home | WTOP App | 103.5 FM

To play squash, first you have to warm up the ball.

When this is explained by Ronny Vlassaks, the highly-decorated, Belgian, Rod Stewart look-alike coach who serves as the head instructor at Squash on Fire in West End, it’s hard to tell if it’s intended to be a metaphor, some kind of wax-on, wax-off, first existential lesson in the sport. No, he means we literally need to warm up the rubber sphere we’ll be whacking around this glass and concrete box until my lungs scream for us to stop.

The rubber ball is much softer — squashier — than expected, and when it’s completely cold, it has no bounce, dropping to the wood floor lifelessly. Inject some power into it, through a transfer of human energy, and suddenly the game comes alive.

That’s the idea behind Squash On Fire, too, which opened in 2017. The game has largely been the provenance of East Coast country club enclaves, Ivy League college programs, and private city clubs in America. But Squash On Fire is open to the public, to anyone who wants to learn. For as little as $20, they can grab a court to themselves for 45 minutes and go nuts.

My net experience with the sport had come from a confused stroll through the University of California campus one afternoon as a teenager and a few thousand clever words in the New Yorker a couple years ago. Fittingly, the author of that piece was a former prep-schooler named Tad.

“In the states here, it’s still, regrettably — back then, and less so now — somewhat of a, for lack of a better word, rarefied sport,” said Richard Chin, teaching pro at the Harvard Club in New York. “There’s not much public access to it. Facilities like this really make a big difference, and we really hope we can get more facilities like this.”

Chin grew up in Guyana, where his family belonged to a club and squash was a part of life the way tennis or golf might be in America. But he knows that’s not a model for growth and inclusion.

“The first, critical step is more courts. More courts in locales where there is a low barrier to entry. More public access, that’s the first step. But you can’t just build the courts. You need an army of enthusiastic teaching pros to build the programs, to have the hands on experience, to nurture the players, especially the kids,” he said.

Chin is in town for the US Nationals, the first of two major squash events coming to Squash On Fire this year. The second such event is the Men’s World Squash Team Championship, which will be played Dec. 14-21, the first time in its 50-year history that it will be played in the United States. The intervening eight months will serve as an interesting litmus test to see what kind of interest and excitement the game generates between now and then. 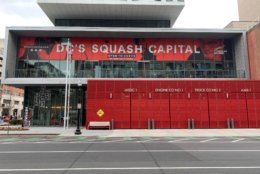 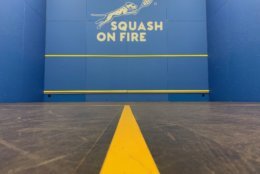 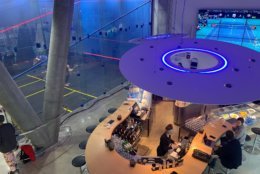 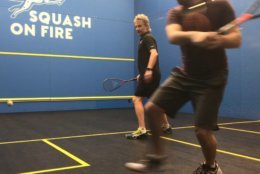 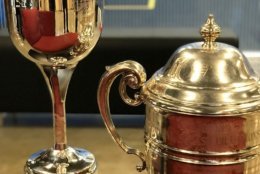 If you’re wondering about the name of the place, it’s actually simple and straightforward. The facility sits, well, squashed, between the D.C. Fire Engine Company 1 station below and an architecturally curious box of affordable housing above. Hence, Squash On Fire. Because this is Washington, to the immediate east rests the Senegalese Embassy. It is squeezed seamlessly into the city, though its bold, red banner and floor-to-ceiling glass presence can’t help but catch the eye from the street below.

Still, what you see from outside is only a small window into what’s inside. There are eight full courts — 21 feet wide, 32 feet deep — along with a workout area open to players for use pre- or post-match play, and a bar.

It might not seem like all that would fit in such space, but don’t be deceived by the lines. Based on dimensions alone, a tennis court will hold only three squash courts. But within the space required around the tennis surface — the minimum suggested length of 120 feet, width of 60 feet — you can fit more than 10 squash courts.

And yet, despite the small working area, the game is physically exhausting. Points are not won by attacking as much as by attrition, physically and mentally wearing your opponent down shot after shot. Games are to 11, win by two, best of five games for the match. Rallies can last for dozens of shots, with just seconds of recovery before the next ball is served. Depending on how big you are, in just an hour of swatting, diving to corners, and scrambling back to the T at the center of the court, you can burn in excess of 1,000 calories.

“In squash, you’re always moving, you’re always doing something, there’s very little breaks,” said Chin. “You’re operating with your heart rate high for extended periods of time. It has a lot of creativity, it’s very strategic, it has a huge technical component. Those are all components that you can attribute to many other sports, squash just seems to have many of them at a higher level of demand.”

Olivia Blatchford Clyne was born into the game. Her parents were both recreational players, and her dad would drag her around to his matches.

“I kind of got to the point where I was like, ‘Dad, I’m sick and tired of you bringing me to these events every weekend. I want to play. When is it my turn?’”

The charismatic, diminutive Brooklynite, now 26, cruised to her second straight national title in just under a half-hour, 11-8, 11-2, 11-6. Ranked 20th in the world, she’s perhaps as close as the game has to a national face, which can only help through her infectious enthusiasm for the sport.

“You have to feel what it’s like to be battling it out in that box,” she said. “When you’re in it, there’s nothing like being on that court. It’s unlike any other sport in that sense that it’s so all-consuming. To me, the best sport is about self-discovery. You find (out) so much about yourself and about the human limits, really.

“We need people to get in there and seduce them that way.”

On the men’s side, 28-year-old Todd Harrity took down the title in four games, 11-7, 8-11, 11-8, 11-4, defeating two-time defending champion Chris Hanson. Ranked 45th in the world, Harrity is the top American man, highlighting just how much more popular the game is abroad. He thinks having a breakthrough player ascend to the top of the sport may be a spark for broader interest in the states.

“That’s basically what happened in Egypt,” he said, referencing Ahmed Barada, who ascended to No. 2 in the world. “It was just a catalyst. Everyone was excited, a lot of enthusiasm around that, a way to kind of see the world and to achieve something new. And now, they’re dominating the sport.”

Indeed, the top three players in the world right now, and seven of the top 12, are Egyptian. But lots of other countries in Europe, Asia, even New Zealand, are represented before you get to the Americans.

“I think that would be incredibly exciting to have an American reach the top of the game,” Harrity said.

That could come from a single player, but more likely from generational changes, born from increased access and exposure. Maybe that will all come in time. But first, they have to warm up the ball.