Column: By any name, Washington football is still an embarrassment — even on its best day

However you feel about Washington’s Alumni Homecoming Weekend, Sunday was supposed to be a special occasion to commemorate the franchise’s 90th anniversary, and to honor the three Super Bowl teams 40 years after the franchise’s first Joe Gibbs-led title. Hell, the team even matched the best stat from that championship performance.

As pointed out by @davpresto, today the #Commanders rushed for 166 yards on 38 carries — the exact same tally that won John Riggins MVP of Super Bowl XVII 40 years ago. Excellent way to celebrate Alumni Homecoming Weekend @WTOP

But this is a Dan Snyder-owned operation so, of course, there has to be proverbial toilet paper on the shoe of the franchise.

Before we go any further, let me give the actual football team its props: The win over Green Bay was probably the most complete game we’ve seen from the Commanders this season. They held an Aaron Rodgers-led offense to 0 for 6 on third down; Terry McLaurin shined in perhaps his most challenging matchup of the season and supported Taylor Heinicke through his early struggles before the quarterback found his stride in the second half. The two-game win streak has them halfway to the annual four-gamer they seem destined for under Ron Rivera.

None of those men deserve the shade thrown the Commanders’ way. But just because there’s a few stormtroopers who happen to be nice guys doesn’t make this any less the Evil Empire. (Well, that was an actual juggernaut — Washington is more like the parodied version in Spaceballs.)

If you looked anywhere but on the field Sunday, there was so much for a Washingtonian to be ashamed of. Sadly, we’ve grown accustomed to opposing fans infiltrating FedEx Field (which, only now, the organization is finally noticing). But at various points around the sea of green, you could also see the owners’ foot soldiers stamping out the anti-Snyder expression that has become the only true unifier for what’s left of the fanbase.

From a team spokesperson: “They should not have been asked to take down the signs. (Bags over heads are not allowed as it’s a safety issue.)”https://t.co/66JPhyfiDP

Tanya Snyder would then — perhaps in a bid to win back a crowd that has grown to despise her just as much as her husband — brazenly reference the old name at a time when the franchise is still trying to sell the fans on this rebrand to “Commanders.” That’s the equivalent of trying to get over an ex but periodically texting “You up?” late at night. (Trust me, that’s going to end badly.)

Fans aren’t too upset about that because, frankly, far too many of them are still shamelessly and foolishly clinging to the old name even though it’s retired. (I wonder whether they’d be so fast and loose about a retirement if some player talked his way into wearing Sean Taylor’s No. 21 or Darrell Green’s No. 28.)

But even the most burgundy-blind fans are facepalming after the consistent misspelling of the names of franchise legends.

One of the key ingredients to honoring someone is to spell their name correctly. It’s bad enough to botch that for London Fletcher but it’s exponentially worse to screw it up for one of only three players in franchise history to win MVP:

Washington has its first win streak as the Commanders. The three Super Bowl trophies won long ago were paraded around FedEx Field by the greats that helped win them. Dan Snyder was nowhere to be seen.

But still, the franchise managed to steal its own shine. It would be infuriating if it weren’t so impressive.

At a time when NFL ownership is finally moving in a direction toward removing Snyder from its ranks, Sunday was a great reminder that it can’t just toss Dan on his ear like Jazz on “Fresh Prince of Bel Air” — the whole family has to go.

At best, Tanya enables Dan. That much was obvious when she gave that shameful “woe is me” routine on Adam Schefter’s podcast last year.

Just listen to how she drops the retired name. I invite you to show me how that’s not intentional:

Here’s the end of the video of Tanya Snyder, which includes her “Hail to the Redskins” (:20). https://t.co/XpIqKP9z3T pic.twitter.com/H5tSIWht6V

A slip of the tongue is one thing. Many have been guilty of it in the immediate aftermath of the name change. But the old nickname went away more than two years ago. Nobody should be pushing harder for the shift to the new name than those who stand to benefit directly from it catching on — unless, of course, they don’t believe they should have had to change it in the first place.

May I offer this reminder that the name change wasn’t some “woke mob” casualty, but a change the people directly affected by it desperately wanted.

“July 13, 2020, is now a historic day for all Indigenous peoples around the world as the NFL Washington-based team officially announced the retirement of the racist and disparaging ‘Redskins’ team name and logo,” the Navajo Nation said in a statement after the decision was announced two years ago. “For generations, this team name and logo has misrepresented the true history and events that define the term ‘redskins.'”

Just like it’s time to move on from the Snyders. All of them. Washington can’t start a new era — or, more importantly, truly heal from the last two-plus decades of dysfunction, pain and embarrassment — until they do. 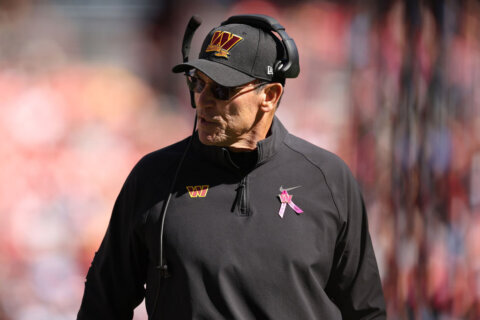 Column: Ron Rivera can save his job by continuing this trend with the Commanders 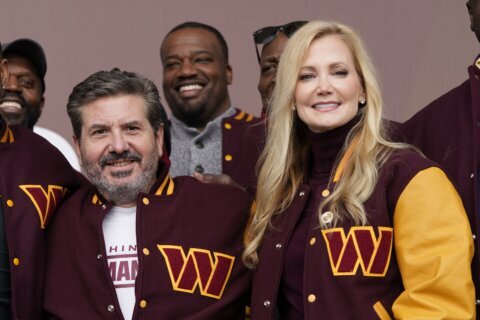 Hail to the who? Tanya Snyder drops Commanders’ old name 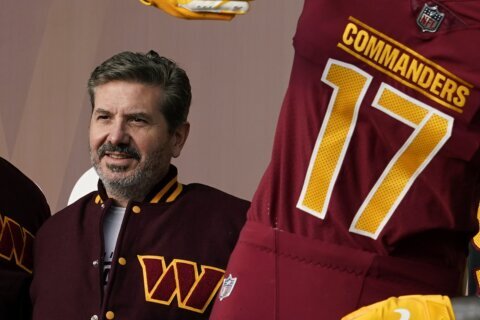