Column: Should Redskins take Young or chase a trade back?

Right or wrong, and whether we think it should or not, the NFL Draft is proceeding as scheduled with a new format in this crazy COVID-19 world. And even outside D.C., one question has been the biggest deal approaching Draft Day: Should the Redskins take bonafide pass rush prospect Chase Young with the second overall pick, or trade back and accumulate multiple draft choices to fill their many needs?

My answer to this is simple: Don’t overthink it. Take Young.

And it sounds like new Redskins coach Ron Rivera agrees.

“You’ve got to be able to sit there and say that the next guy that I’m going to take is going to be that high-impact guy, and that’s what I’m looking for. That’s what I believe we need is we need a guy that’s going to come in and really change our football team. To me, there’s a few guys on that board that are those kind of players.”

Did you catch all that? Let me simplify what coach is saying.

Young is widely considered to be the top overall prospect available in this draft, regardless of position. He had 30.5 sacks and 40.5 tackles for loss in his 34 career games at Ohio State, with nearly half of those totals (16.5 sacks and 21 tackles for loss) coming in 2019. It’s uncommon for a player of this caliber to go after the first overall pick (Cincinnati is a virtual lock to take LSU QB Joe Burrow), so the Redskins basically hold a lottery ticket for a potential generational talent at a premium position. All they have to do is cash it in.

We saw the impact Young’s former college teammate Nick Bosa had in San Francisco last season after he was selected second overall. The 49ers’ biggest need wasn’t another pass rusher, but they stockpiled a defensive front that went on to rank first in the NFL against the pass. You can add that to the list of reasons the Niners are a perfect blueprint for the Redskins, who could boast a lineup featuring Young, Montez Sweat and Ryan Kerrigan off the edge, with Jonathan Allen and Matt Ioannidis providing push up the middle. The defensive-focused coaching staff could make that unit every bit as stout as San Fran’s.

It looks good on paper to get a bunch of picks in exchange for one, but the problem with that kind of trade is that the pressure is on to knock all those picks out of the park. And the reality is, NFL history is littered with examples of teams that wasted a bounty of picks — and two of the most recent involved the Redskins.

Who could forget the ‘Skins’ trade up with the Rams to take Robert Griffin III with the second overall pick in 2012? St. Louis netted three first-round picks and a second-rounder in the deal and turned that into Janoris Jenkins, Michael Brockers and a bunch of “meh” players. That provided little more than one good day for then-coach Jeff Fisher before he got fired for actually being worse than a Redskins team that utterly collapsed after RGIII’s scintillating Offensive Rookie of the Year campaign.

In 1999, the Redskins failed to take full advantage of Mike Ditka’s obsession with Ricky Williams. The New Orleans Saints sent eight picks to Washington, including two first-rounders, for the fifth overall pick in one of the most ridiculed draft trades in NFL history.

The Redskins turned those picks into little more than Champ Bailey and LaVar Arrington, two players who spent only four seasons together and couldn’t get out of Washington fast enough. The ‘Skins’ inability to turn that trade into the foundation for a championship run is still among the worst organizational failures in franchise history.

The Redskins are in the midst of an organizational overhaul and culture change. Right now, more than anything, they need a game-changer both on and off the field. Young is the only one in this draft who can be for this particular franchise.

Young was a standout at DeMatha Catholic High School and grew up in Prince George’s County. The civic pride associated with the Redskins building a defense around a supremely talented local kid would spark the kind of boost at the box office this franchise needs, given its well-documented struggles to fill the stands with their own fans.

Absent an offer they simply can’t refuse — one that far exceeds the price paid for RGIII — the Redskins are best served by taking the local superstar over three or four players that likely won’t be as special as Young. 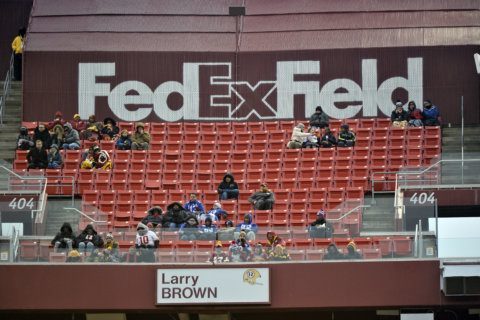