The Baltimore Ravens' 22-year-old phenom is torching the NFL with his mind and his arm as much as he is his legs. Rob Woodfork explains how Jackson has changed the narrative about the black quarterback in pro football.
Listen now to WTOP News WTOP.com | Alexa | Google Home | WTOP App | 103.5 FM

Considering this season has been a passing of the torch from the older pocket passers of yesteryear to the young dual threats of today, it was fitting that the Baltimore Ravens’ 22-year-old phenom torched the hapless (and winless) Cincinnati Bengals both by air and by ground Sunday, highlighted by the best touchdown run by a quarterback we’ve seen in years.

As breathtaking as Jackson is as a runner, his passing ability is what made NFL history on Sunday and continues to tear down the racist myths about the black/running quarterback with each dominant showing.

This is the 2nd time this season Lamar Jackson has recorded a perfect passer rating (Week 1 at Miami).

He is the 6th player in NFL history with multiple career games with a perfect passer rating (158.3), and the 2nd player to do it twice in one season (Ben Roethlisberger, 2007). pic.twitter.com/oP9rDeyVdc

Jackson’s 15-of-17, 233-yard, 3-TD performance puts him alongside Rodgers and Joe Montana as the only players in the Super Bowl era to throw for three touchdowns, rush for another and post a perfect passer rating on 15 or more pass attempts. That doesn’t engender another lazy comparison to Michael Vick or Randall Cunningham — it puts Jackson in Hall of Fame company with two guys that look nothing like him.

But no one truly looks like Jackson. He’s got all the speed and shiftiness that made Vick a superstar, but he’s twice the passer Vick ever was (yes, including during his career resurgence under Andy Reid in Philadelphia). Jackson’s on pace to shatter Vick’s rushing records, and is among the most efficient passers in the league, completing nearly 66 percent of his throws for a 101.7 QB rating.

Will never get tired of seeing @Ravens @Lj_era8 make perfect throws. Every ball was perfectly on the money. He can pass, he can run, how do you stop him? Give this guy every award there is right now! #RavensFlock #baldysbreakdowns pic.twitter.com/kDMBynY99b

The fact that Jackson’s two perfect passer rating games came against inept teams like the Dolphins and Bengals shouldn’t warrant an asterisk next to his accomplishment. Tom Brady and Philip Rivers failed to do similar damage to Miami, and Dak Prescott’s passer rating didn’t even break 100 against the Fins. Jackson’s next best game came against the vaunted Patriots defense in prime time, hanging a 73.9% completion percentage and 107.7 QB rating on the great Bill Belichick, prompting Hall of Fame talent evaluator Bill Polian to moonwalk off his borderline racist pre-draft take on Jackson.

As Peter King pointed out, Jackson’s sophomore surge comes 50 years after Shack Harris became the NFL’s first black QB to start a season opener. Half a century later, QBs of color are not only starting, but excelling at the position, demolishing every archaic thought about the black quarterback. Three of the top four QB ratings among regular starters are being posted by men of color. In fact, the whole damn MVP race is shattering stereotypes, with Jackson, Russell Wilson, Deshaun Watson and Patrick Mahomes as the QB front-runners and the speedy, workhorse running back Christian McCaffrey in the mix as well.

Watson and the Houston Texans come to M&T Bank Stadium on Sunday for a matchup that will not only provide more insight into whether he or Jackson wrangles the inside track to MVP, but potentially serve as the first installment of what the NFL surely hopes will evolve into a QB rivalry that makes Peyton Manning vs. Tom Brady look like it was recorded on black and white film.

Watson deserves props for what he’s done to make Houston a contender — and his thoughtful, must-see breakdowns for reporters should absolutely get him some Manning-esque post-playing options — but this season, Jackson has been the NFL’s most impactful myth buster of them all.

“You changed the game, man.”

Though I’m not ready to call Jackson the league’s MVP (that title belongs to Russell Wilson so far, since he’s got far less top shelf help around him in Seattle than Jackson has in Baltimore), he is the most electric, singularly dominant offensive player in the league this season. And he’s doing it with his mind and his arm every bit as much as he is his legs. 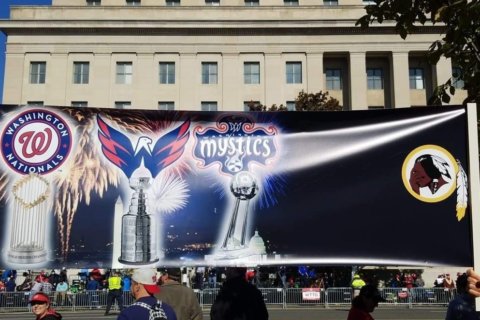