After two seasons of debate and controversy, the NFL finally did something to address the topic of player demonstrations during the pregame national anthem — except they really didn't.
Listen now to WTOP News WTOP.com | Alexa | Google Home | WTOP App | 103.5 FM

WASHINGTON — After two seasons of debate and controversy, the NFL finally did something Wednesday to address the topic of player demonstrations during the pregame national anthem.

Except they really didn’t.

NFL owners unanimously approved a policy that requires players to stand for the national anthem, while allowing those who don’t want to stand to remain in the locker room. While Commissioner Roger Goodell all but broke an arm patting himself on the back for this self-proclaimed compromise, it’s really just another misdirection from the true message of the players’ silent resistance.

The new anthem policy states that players “shall stand and show respect for the flag and anthem.” Issue with this: it implies that those that kneeled weren’t respecting the flag. Furthering the false idea that the protests were about the flag. The protests are about injustice.

The league’s statement all but admits the policy is aimed more toward placating those who agree with the elected official who called any player who knelt a “son of a bitch” last year.

But for a moment, let’s set aside this blatant act of forced patriotism. Or that the players or the player’s union didn’t get a vote on the matter. What’s truly fascinating is that the only party that continues to make this topic relevant is the NFL itself.

Colin Kaepernick, who is regarded as the author of the silent resistance, said last offseason he wasn’t going to kneel during the anthem anymore. Eric Reid, his former San Francisco 49ers teammate who knelt with him in 2016, did the same this offseason and like Kaepernick, remains unemployed. No active player has definitively said they will continue to kneel in 2018.

Thus, in an ironic and shortsighted move by the NFL, they’re keeping this topic in the headlines by clumsily trying to keep it out of the headlines.

Furthermore, the list of issues the league is facing is long. Player safety. Concussions. Player misconduct (sidebar: I’d love to hear the explanation for why Eli Manning hasn’t been subject to discipline for his involvement in a fraud scheme). How best to cope with the reality of fans enjoying the game outside of the live stadium experience.

Putting an end to people of color standing up for themselves in order to appease an exaggerated number of offended parties shouldn’t be anywhere on the agenda. And if you don’t think it’s about that, at least one NFL owner sees this for what it is:

49ers owner @JedYork abstained from the anthem vote, thinks a deeper look is required, and says his team will not make concession sales during the anthem. “I don’t think we should be profiting if we’re going to put this type of attention and focus on the field and on the flag.”

If this is truly about “respecting the flag,” then why aren’t we talking about the ability for fans to buy beer and nachos? Or the obnoxious “OOOOs” chant by Orioles fans? Or the literal use of the flag as a prop?

The reality is, the national anthem has no place in the pregame routine. I mean, if people don’t want politics with their sports — which is one of the chief complaints of players kneeling — then certainly we can agree that a sporting event is not the place for a war hymn aimed at galvanizing troops. But the anthem isn’t going anywhere anytime soon because the league has been profiting off patriotism for years.

Do you remember hearing anything about anthem protests before 2009? You didn’t. And that’s because the practice of having players and coaches on the sidelines that early wasn’t in place. If the anthem is here to stay, the sidelines should be empty for it. At least then there’s a uniform action for players and the illusion of an appropriate attitude about the flag remains intact.

All the NFL has accomplished is driving a wedge between the two sides of a needlessly polarizing and contentious topic. Oh, and opening up a loophole to the proposed 15-yard penalty for kneeling:

Idea from a colleague in the newsroom: Each NFL team should just talk with the other team they’re playing that day, send out an equal number of players to kneel on each side. Offsetting penalties, as you were

I mean, if the league can blackball Kaepernick and Reid — and now that their anthem demonstrations have been outlawed, we’re about to find out definitively if they were — why can’t the players do a little colluding too?

After all, it’s a free country. 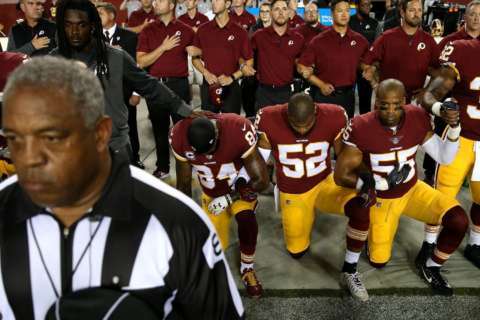 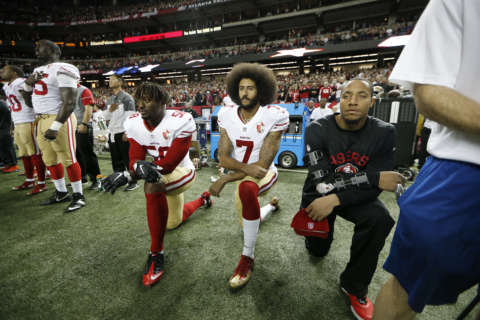 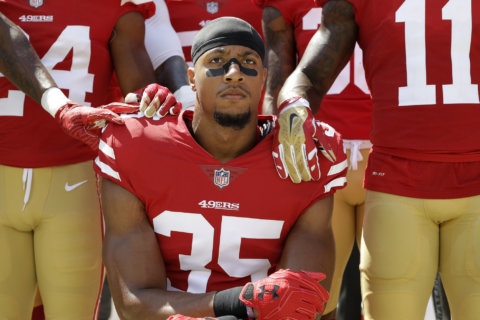 Another galling NFL blackballing: Reid’s is more glaring than Kaepernick’s 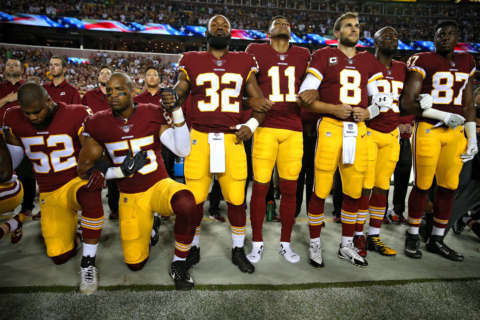 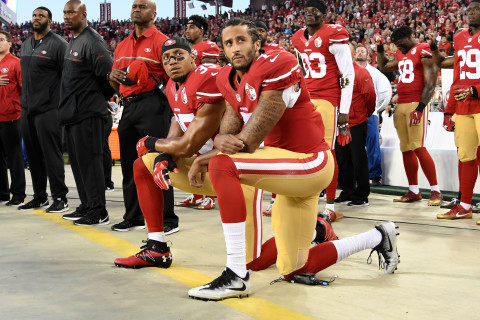