Super Bowl LI Wrap: Patriots save their best for last

WASHINGTON — After struggling through a postseason defined by a series of blowouts, all we really wanted out of Super Bowl LI was a great game.

What we got was a comeback for the ages.

Though it looked like we were getting more of the same when the Atlanta Falcons scored the game’s first 21 points, the New England Patriots scored the final 31 to snatch the rug — and the Lombardi Trophy — out from under the title-starved Falcons in a historic 34-28 overtime victory we’ll never forget.

Regardless of how people outside New England feel about it, the NFL’s greatest dynasty just won the single greatest game in Super Bowl history. This game had everything you want in a title bout: Huge momentum swings, memorable plays, unlikely heroes, and a dramatic finish. Add in a heartwarming story or two and you’ve got a tale that Hollywood would otherwise label implausible.

The first half looked like a stunning coronation for Atlanta. Playing the Pats to a scoreless first quarter draw was a win of sorts and the underdog Falcons seemed to get all the breaks. The run game was clicking, Matt Ryan played even better than you’d expect from a man named league MVP (he had a perfect passer rating well into the 3rd quarter), and the defense was having exactly the kind of game you need to have against the Patriots, stopping the run and making Tom Brady run for his life. At least half of America thought the game was over when they watched Robert Alford sprint into NFL lore with an 82-yard pick-six of Brady, the second-longest such play in Super Bowl history (and the first of Brady’s illustrious playoff career).

While the Patriots deserve credit for making noticeable adjustments at halftime (Atlanta rushed for just 18 yards on only nine second-half carries), this was more of a Falcons choke job than the pinpoint precision of the Pats. Aside from Atlanta’s abandonment of the run game, they could have put New England on the ropes by scoring after the Pats’ desperate onside kick attempt failed. It didn’t happen. Julio Jones made a catch so ridiculous we just knew it was going to be one of those iconic plays that defines a Super Bowl. All it begot was a playcalling comedy of errors by a guy who’s about to be a head coach. There are plenty of sure things in life, and winning a playoff game while holding a 19-point lead in the 4th quarter is supposed to be one of them. Yet the only thing Atlanta now holds is the distinction of being the only team in 94 playoff games to blow such a lead that late in the game.

While I don’t blame Ryan for the epic collapse (his 144.1 QB rating was the highest ever in a Super Bowl loss), he certainly deserves to be criticized for the late offensive drought. Ryan took three sacks in the 4th quarter, the last of which took Atlanta out of field goal range and killed any hopes of stealing some of New England’s momentum and forcing them to overcome an 11-point deficit with about three minutes left to play. Though largely unfair, his viability as an elite quarterback took a big hit after that.

Conversely, Brady shook off his horrible start to provide his best-ever finish: 43-of-62 passing for 466 yards to overcome a 25-point deficit and win his 4th Super Bowl MVP in five career title victories. Every single one of those numbers is a Super Bowl record.

The Patriots are more polarizing than ever for a variety of reasons, but it’s hard not to feel good for Brady. His mother’s struggle with cancer became public during the media overkill leading up to the game and we saw an emotional side of Brady we hadn’t really seen before. Brady dedicated the game to her and despite the slow start, more than did his mother proud.

Yet I would make the case that James White was the real MVP of this game. White set Super Bowl records for catches (14) and points (20 via 3 total TDs and a huge two-point conversion) despite being inactive in the Patriots’ last Super Bowl win. Two years later, he was the most consistent offensive contributor in the largest comeback in Super Bowl history. White is the latest in a long line of unlikely heroes Bill Belichick has churned out of his factory of winning football.

Speaking of which…you know all the gaudy numbers by now. Belichick’s five Super Bowls are the most of any coach in NFL history. Brady’s five titles trumps all quarterbacks, including his childhood hero Joe Montana. Their status as the greatest coach/QB duo individually and collectively was already affirmed, in my book.

But this game showed us so much more. It demonstrated the Patriots aren’t some evil empire that steamrolls the competition year in and year out, but rather a team that is so well coached and mentally tough they can withstand any adversity and meet any challenge. Such a feat is incredibly rare and the difficulty of winning consistently and for so long — their 15 years between their first and latest championship is, of course, an NFL record — can’t be understated.

This game was a perfect mic drop moment. Commissioner Roger Goodell handing Brady a pair of trophies just months after handing him a BS suspension. This would be the perfect time to ride off into the sunset and let this be the lasting image of the greatest run in professional football.

But Brady and Belichick don’t adhere to the laws of common man. So bet on them being back in this game again, and under different circumstances. 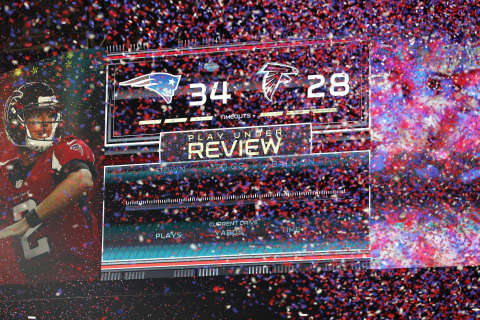