Pressure mounts on US after 2 draws in World Cup qualifying

NASHVILLE, Tenn. (AP) — Players walked off the field dejected. Nervous American fans are in an uproar.

No, this wasn’t four years ago. This is the here and now for the U.S. soccer team, which has just two points after its first two World Cup qualifiers, three injured regulars and a team leader sent home for violating COVID-19 protocols.

A 1-1 draw at home against Canada, which last reached soccer’s showcase in 1986, caused concern and ratched pressure. Instead of a revival under coach Gregg Berhalter, the Americans are sputtering heading into Wednesday night’s game at Honduras, their third in a seven-day span. The U.S. hasn’t won a qualifier since 2013 in Central America, where it has one win and three draws in its last eight matches.

“The hole’s starting to get a little deeper,” former American defender Marcelo Balboa, now a commentator for Univision, said Monday. “It puts more emphasis on the away game in Honduras, which we know, the grass will be thick. It’ll be hot. It’ll be humid. The fans will weigh — the buzzing sound for three hours leading up to the game surrounding the stadium.”

Midfielder Weston McKennie, a member of the team’s six-man leadership council, was told to return to Italy by Berhalter after violating team COVID-19 protocols. McKennie, among the top American players, was kept off Sunday’s game-day roster by Berhalter for the rules violation. Breaking COVID-19 protocols by hosting a party caused him to be dropped by Juventus for its Derby della Mole against Torino in April.

“There are high expectations for those who are a part of the U.S. men’s national team, and in order to be successful it’s important that everyone in the group is accountable,” Berhalter said in a statement.

San Jose midfielder Jackson Yueill was added to the roster and trained with the team Monday at Lipscomb University.

They have managed only slightly better than the awful start to the previous cycle, when the U.S. opened with a 2-1 home defeat to Mexico and 4-0 thrashing at Costa Rica.

“It’s a team sport,” Adams said. “It doesn’t matter where we come from. If we don’t go out there and do the things that we’re good at, that we’re just a group of names on a piece of paper. Other teams, maybe they don’t have the players that play for these big clubs, but it doesn’t matter.”

And suspensions may become a factor soon. Defenders John Brooks, DeAndre Yedlin and Mark McKenzie have received yellow cards along with Adams and Pefok. Any of those would receive a one-game ban for an additional single yellow card.

Play in the first two games was subpar.

“We needed much faster ball movement. Everyone could see from the outside it took just way too long on the ball,” Berhalter said.

Some faulted the coach for waiting until the 83rd minute to make three substitutions aimed at getting a goal. Berhalter said he held off because he thought Aaronson and Pefok were among the better Americans on the field.

“I can understand how it looks like we should have acted quicker 100% in this situation,” Berhalter said. 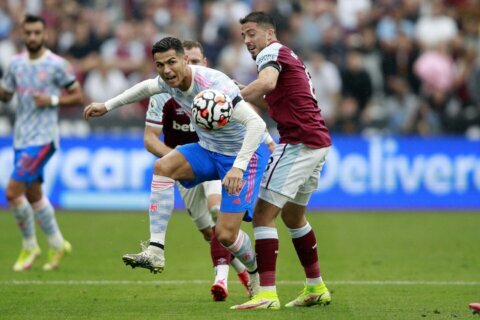