Being left off the World Cup roster could have been devastating setback for Andi Sullivan. Instead she's used it to fuel herself and her team to the top of the standings.
Listen now to WTOP News WTOP.com | Alexa | Google Home | WTOP App | 103.5 FM

On April 11, six Washington Spirit players sat, smiling, a ring of media snapping photos and peppering them with questions. They were the half-dozen included on their respective country’s national team rosters, all potentially headed to the World Cup in France, which starts this week. While the Spirit’s press release was clear that some of these decisions were still up in the air, the players were interviewed as a group, asked questions specific to this summer’s tournament, to balancing life between club and national team duties.

Someone asked if that left time to see friends. Seated along the row with her roommates and teammates for club and country, Rose Lavelle and Mallory Pugh, Andi Sullivan laughed.

“These are my friends,” she said, looking around.

A few weeks later, the news came down — of the six, five had been selected to their respective teams for the World Cup. The two Australians, Chloe Logarzo and Amy Harrison, Cheyna Matthews to the Reggae Girlz of Jamaica, and Lavelle and Pugh to the US Women’s National Team.

Sullivan was one of the last players left off the 23-woman roster.

“The World Cup is something every player dreams of their whole life,” she had said, back at that preseason press conference. “That’s your goal. That’s your dream. So I think everyone is really behind us in preparing for that.”

That dream deferred, starting this week, Sullivan will be watching the World Cup the same way millions of others around the world will, at home on her couch. But that doesn’t mean she’s sitting around feeling sorry for herself. And if there’s a 23-year-old with the fortitude and perspective to absorb such a setback and use it constructively, it just might be Sullivan.

Much has been written about Sullivan’s maturity, of her decision-making beyond her years both on and off the field. New Spirit Head Coach Richie Burke made Sullivan — again, just 23, in her second year out of college — captain before the season. When she received that honor, even those writing about her extra responsibility seemed to think she was destined for France this summer. But Sullivan didn’t allow herself to buy into all the noise.

“I wouldn’t say I was expecting not to, but I was definitely prepared,” she told WTOP recently of being left off the World Cup roster. “But you can only do so much to prepare for news that you don’t want to hear.”

Pugh was already gone when Sullivan got the call. She was told before the announcement, to spare the shock of finding out via social media. Words of intended encouragement — that this was “not the end of the road” — may seem self-evident for such a young player, but they’re not, not with one of the hardest rosters to crack in any sport. Sullivan was able to step back from the temptation to internalize the situation as a referendum on her own talents and ability.

“At the end of the day, I know it’s really not about me anymore. It’s about them doing what they need to do. Instead of feeling sorry for myself and having them feeling sorry for me I just tried to focus on getting them excited, getting them prepared, doing what they needed to do and feeling proud of them, because I am excited for them,” she said.

That doesn’t mean she pretended like everything was fine, internalizing her frustrations and disappointment. It’s a tough balance to strike, trying to be supportive of your friends and teammates while also tending to your own mental health.

“You need support at that time,” she said. “We’re adults, but you need help. It’s not an easy time.”

Her maturity perhaps shines through the most not when discussing the disappointment of being left off the World Cup roster, though, but rather when asked about her thoughts on a completely different matter.

She’s a party to the lawsuit the USWNT has filed in search of equal pay, but recognizes that, as a player who isn’t firmly entrenched on the national stage, it may not be her time yet to be a vocal leader. She has her own issues she’d like to focus on as well, particularly access to play for youth girls who can’t afford expensive academies, but could have the talent to contribute to the national team.

But when pressed on whether that’s an issue she thinks disproportionately affects young women, she pauses and considers, rather than force a reflexive answer.

“I think I’d have to do more research on that before I spoke up about it.”

Raised in Lorton, Virginia, Sullivan played club soccer in Bethesda and McLean before graduating from South County High School. Growing up, she was a frequent visitor of the Maryland SoccerPlex, taking in professional women’s soccer in its various iterations in the D.C. area as a fan and aspirant.

“I would come up here pretty much every weekend that they were home and watch them play,” she said. “I felt lucky to be close to a professional team, because not a lot of people get that.”

She’s aware of the fortunate position she’s been put in that has allowed her to excel. She had the kind of support that led her to earn spots on the under-15, under-17, under-20, and under-23 national teams, as well as a scholarship to Stanford. The Cardinal’s absurd record while she was there — 81-7-8 — put a bright spotlight on her stellar play, leading to the Spirit selecting her first overall last year. But even that road didn’t come without a major challenge.

Sullivan tore her ACL during an NCAA Tournament second-round game against Santa Clara her junior year. Almost immediately after her injury, the Broncos scored and bounced the Cardinal from the tournament.

A year later, Sullivan and the Cardinal won the College Cup.

Sullivan’s current fortunes mirror those of Crystal Dunn, another talented player who, four years ago, was a couple months shy of her 23rd birthday when she was left off the World Cup team. Also playing for the Spirit at the time, Dunn focused her energy on the NWSL season, scoring a league-high 15 goals en route to the MVP.

Dunn’s story is well known now. She made the 2016 Olympic team and will be in France this summer. While Sullivan plays an entirely different position, Dunn’s road map gives her some pretty tangible goals to work toward.

“She is definitely an example that I’ve been thinking of in the back of my mind,” said Sullivan of Dunn. “I’m not going to sit here and waste away while they’re preparing and going to the World Cup. I’m also going to use this time to get better and help my chances for the Olympics.”

It’s one of the oldest sports clichés, the idea that there are forces beyond your grasp; that you should only focus on what you can control; that you can only do your job and take care of the task in front of you. The difference between three years ago at Stanford and now is that Sullivan is still on both feet, fully healthy, ready to contribute. And, like Dunn did, she has a team that needs her abilities.

Last year, the Spirit were saved only by the unmitigated disaster of Sky Blue’s one-win campaign from a last-place finish. Sullivan called the season “the hardest experience I’ve ever had with soccer.” This year, through just seven games, the Spirit has already collected five more points than in 24 games in 2018.

Needless to say, Sullivan’s been taking advantage of the opportunity. Since a scoreless draw against Seattle two days after the announcement, the Spirit have rattled off four consecutive wins, outscoring their opponents 10-3 over that stretch. Wearing the captain’s armband, Sullivan has played the full 90 minutes in all four games.

As the USWNT heads off to France, the Spirit sit atop the NWSL standings. 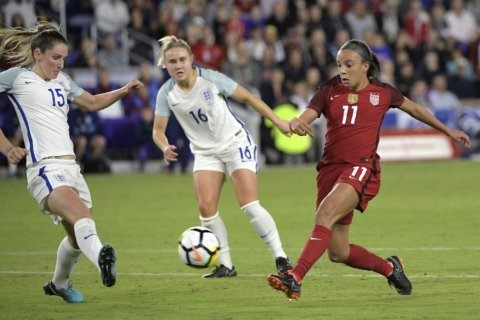 NWSL season kicks off with a whole new Spirit